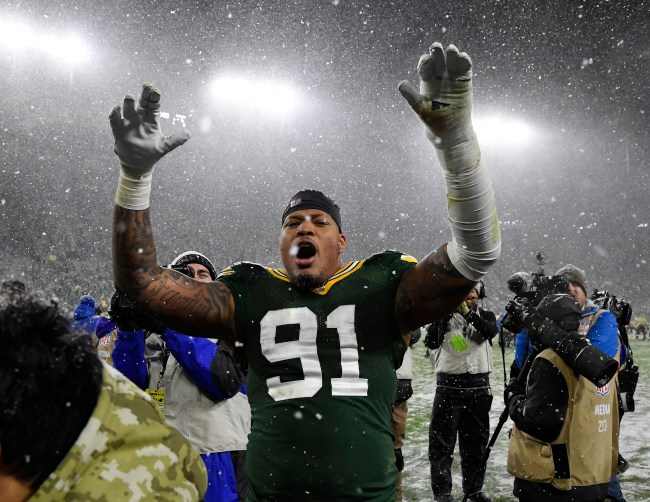 Preston Smith is proving to be pretty damn valuable for the Green Bay Packers this season. After leaving the Washington Redskins to sign as a free agent with the team this past offseason, Smith is leading the team in sacks with 10, and, thanks to reaching that double-digit mark, every single one of his teammates is getting a pretty awesome gift.

That’s because, per Packers Wire, Preston Smith is buying every player on the defensive side of the ball a F’in Rolex watch, praising his teammates for helping him get to the career milestone of 10 sacks. And, considering Smith signed a four-year, $52 million contract, he’s clearly got the coin to afford such expensive things like Rolexes for all of his defensive mates.

So where did the idea to reward his defensive teammates come from? According to the Packers Wire article Preston Smith and teammate Za’Darius Smith made a wager with one another about who could reach double-digit sacks first. With Preston winning that bet the other day against the Panthers, he decided to give praise to his defense for helping him get there.

The two Smiths put a friendly wager on the race to 10. Whoever got there first would be responsible for buying gifts of their choice.

Preston, the winner, has made his decision.

He said in the locker room Sunday night that he’ll be buying Rolex watches for every player on the Packers defense. Not just for the outside linebacker room, but everyone on defense.

Za’Darius said he was planning to buy every player a chain with their number if he had gotten to 10 sacks first. Preston beat him there and then beat his present idea.

In an interview with reporters in the locker room after making the announcement, Preston Smith and Za’Darius Smith had this to say, per ESPN.

And now it’s Rolex watches for everyone.

That stunned even Za’Darius.

As the two did their customary joint postgame interview, Preston confirmed: “The whole defense. They helped me get there.”

This is pretty awesome, isn’t it? To throw out the old cliche, “there’s no ‘I’ in team,” and Preston Smith is just living by that mantra after reaching a career milestone — and is giving lots of praise to his defensive teammates for the help. Having millions of dollars to do cool things like this must be pretty awesome.