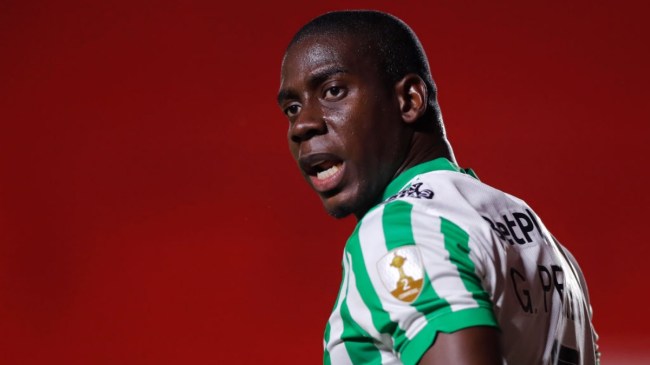 Over the weekend, a professional soccer player in Colombia decided to test out a new way to defend free kicks.

During a match between Santa Fe and Jaguares in the colombian first division, Santa Fe’s Geisson Perea was lined up as a part of his team’s wall to defend a free kick.

Usually, players in the wall who are facing towards the free kick taker will place their hands in front of their manhood to protect it from strike they’re standing in front of. Perea decided to take a different approach, pulling his pants down to expose himself to the opponent.

A pro soccer player whipped out his 🍆 to try to gain an advantage over his opponent. https://t.co/DnrkPVF3K5

Geisson Perea was somehow not disciplined on the field for his new form of defense, which seems odd given the things that are usually punished by soccer refs. If a player removes their shirt after scoring a goal, it is automatically a yellow card in many of the top leagues.

If you were thinking removing shorts instead of a jersey was a safe loophole, that isn’t the case either. Mirko Vucinic was yellow carded after famously removing his pants to celebrate scoring goals on more than one occasion. Yet, this somehow escaped punishment from the referee.

Unfortunately for Perea, his efforts proved to not be enough to get the win for Santa Fe. Jaguares won the game 2-1 despite the distraction as it seems Perea’s extra defender doesn’t also score goals.

The result was a bit surprising as the win moved Jaguares into sole possession of 16th place while Santa Fe is currently in 8th, just 3 points behind the top team in the league.