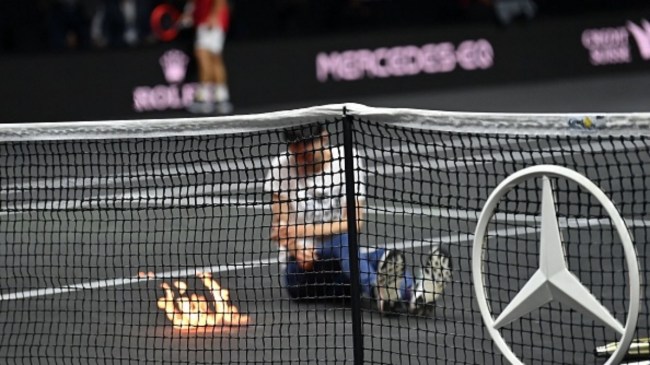 Today was expected to be a day of celebration at the Laver Cup in London. Roger Federer is set to play his farewell match later tonight, an event of great importance for the tennis world.

However, before Federer could ever take the court, things took a strange turn at the Laver Cup.

During a match between Stefanos Tsitsipas and Diego Schwartzman, a protester made their way down to the court. The man was wearing a white t-shirt with the message “End UK Private Jets”.

During the course of his protest, the man lit a fire and in the process, somehow managed to light his own arm on fire.

The man was dragged off of the court after security was able to extinguish the fire. According to the Laver Cup’s organizers, the man was arrested on suspicion of aggravated trespassing and taken to the hospital as a precaution due to the injuries stemming from the fire.

Following the protest, Tsitsipas was asked his thoughts on the incident. He said, “It came out of nowhere. … I never had an incident like this happen on court. I hope he’s all right.”

Luckily for Tsitsipas, the protest didn’t seem to have any effect on his performance. He went on to win the match in dominant fashion, 6-2,6-1.

Fans were certainly expecting some excitement tonight with Federer teaming up with Rafael Nadal for a doubles match against Jack Sock and Frances Tiafoe. in the last match of his career. Let’s just hope there are no more protesters with flammable body parts looking to crash the party during Federer’s farewell from tennis.