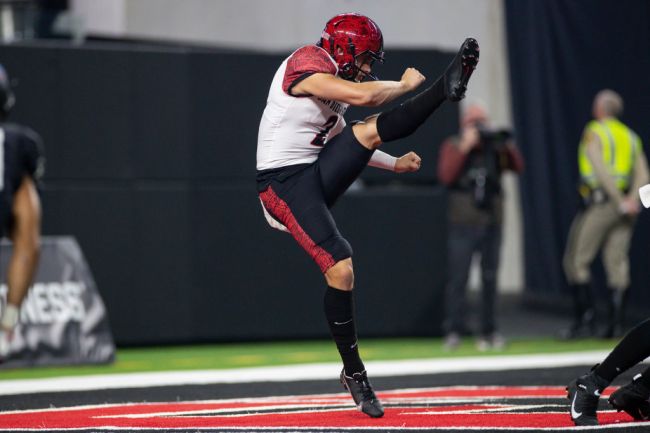 That man was none other than Matt Araiza, the Punt God, who was college football’s most electric punter on a San Diego State team that regularly required his services.

After a bit of a wait, he was finally taken off the board by the Buffalo Bills with the 1st pick in round 6 (#180 overall). After hearing the news, Araiza had the perfect reaction to learning where he would start his NFL career.

SOMEONE GET ME A TABLE!! https://t.co/mIr2tYt8LT

While there were plenty of fans who were disappointed to have to wait so long to see the Punt God come off the board, especially with a kicker and two punters being drafted in round 4, Araiza winding up in Buffalo may just be worth the wait.

Araiza developed quite the following among college football fans as he established himself as college football’s best punter last season. His 51.2 yards per punt average was an NCAA record and he had multiple punts travel more than 80 yards in his final season with the Aztecs.

He also did some kicking in San Diego, making 96 of 97 extra points and 50 of his 68 field goal attempts.

Now, Araiza joins the Bills and seems more than ready for everything that comes with the team’s devoted fanbase.

I’d imagine the organization won’t be in a rush to find that table for Araiza, but Bills Mafia will surely appreciate the enthusiasm of the college football legend that is joining their roster.