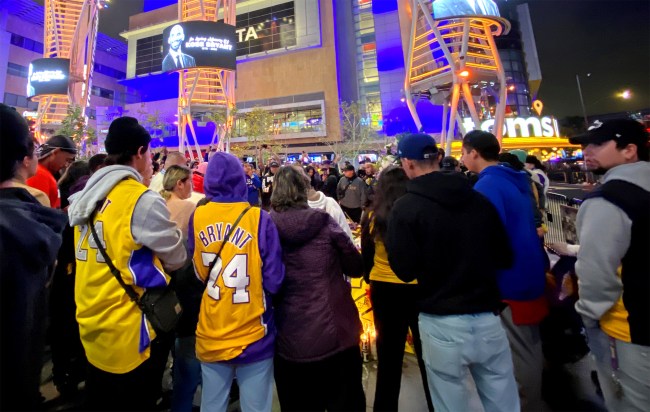 The Los Angeles Lakers players weer informed of the unexpected death of future Hall of Famer Kobe Bryant as the team was flying back from Philadelphia on Sunday. As they were seen exiting the team plane, many, including LeBron James, were embracing friends and loved ones, wiping tears from their eyes.

So far, the players on the current Lakers roster have had little to nothing to say about Bryant’s passing as they process what has to be a shocking and emotional event.

One player, 26-year-old Quinn Cook, a current guard for the Lakers, who has only been with the team since he was signed by Los Angeles in June, has made a public appearance and appeared completely heartbroken as he joined fans mourning the Lakers legend at the Staples Center.

Quinn Cook of the Lakers mourning the loss of Kobe Bryant at Staples Center today.

Kobe Bryant’s impact on basketball players around Cook’s age will certainly go down as a large part of his legacy.

Just saw this.. broke my heart all over again. Stay strong @QCook323 pic.twitter.com/TMYOIYlvkK

The Lakers do not play again until Tuesday night at 9 p.m. ET when they face the Clippers in a battle of Los Angeles teams.

Clippers head coach Doc Rivers as well as star player Kawhi Leonard have already given the NBA world a preview of what a heart-wrenching night that will be for everyone involved in the game as they struggled to contain their emotions before and after their contest versus the Orlando Magic on Sunday.

Doc Rivers on what Kobe Bryant meant to our players. pic.twitter.com/xDe58kwTJ3

"Just knowing him personally, I know he'd want me to come out here and try to ball"

Kawhi on Kobe Bryant after the game. pic.twitter.com/3trPWyEVMP