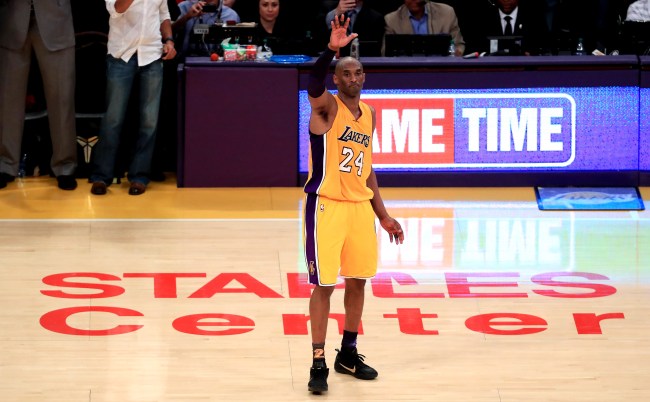 The world is still reeling over the unexpected death of Los Angeles Lakers legend Kobe Bryant in a helicopter crash on Sunday morning.

The tributes to the 41-year-old future Hall of Famer have been coming in almost non stop from key figures in Bryant’s life like Michael Jordan, Magic Johnson, Shaquille O’Neal, Dwyane Wade, and many more.

Three people with unbreakable ties to the franchise with which Bryant spent his 20-year career, Jerry West, Phil Jackson, and Jack Nicholson, can be counted among those who have found themselves heartbroken over the loss of their friend.

Lakers great Jerry West, who not only starred for the team as a player, also served as the team’s coach and general manager – the latter a role in which he was responsible for trading Vlade Divac to Charlotte for the draft rights to one Kobe Bryant.

Sunday night, after issuing a statement, West spoke to ABC about Bryant’s passing.

Statement from Jerry West on the passing of Kobe Bryant: pic.twitter.com/miNDpJUsXm

“One of the worst days of my life. The only thing I can compare it to is I had a brother killed in Korea. I’m just devastated by this news,” West told ABC.

The man who coached Bryant during all five of his championships with the Lakers, Phil Jackson, also issued a statement, and said, “The crash was a tragedy for multiple families. My heart goes out to Vanessa and the families that lost loved ones. Kobe was a chosen one – special in many ways to many people. Our relationship as coach/player transcended the norm. He went beyond the veil.”

Statement from Phil Jackson: “The crash was a tragedy for multiple families. My heart goes out to Vanessa and the families that lost loved ones.Kobe was a chosen one-special in many ways to many people.Our relationship as coach/player transcended the norm.He went beyond the veil"

The man who was there courtside for hundreds of Kobe Bryant’s home games in Los Angeles, Jack Nicholson, also shared his reaction, speaking to CBS Los Angeles.

“My reaction is the same as almost all of L.A.,” said Nicholson. “Where we think everything’s solid, there’s a big hole in the wall. I was used to seeing and talking to Kobe that… it kills you. It’s just a terrible event.”

Nicholson also shared a quick story about the first time he met Bryant.

“I teased him the first time we met,” Nicholson recalled. “It was at the Garden in New York and I offered him a basketball and asked him if he wanted me to autograph it for him. He looked at me like I was crazy.”

Nicholson added, “We’ll think of him all the time and we’ll miss him.”