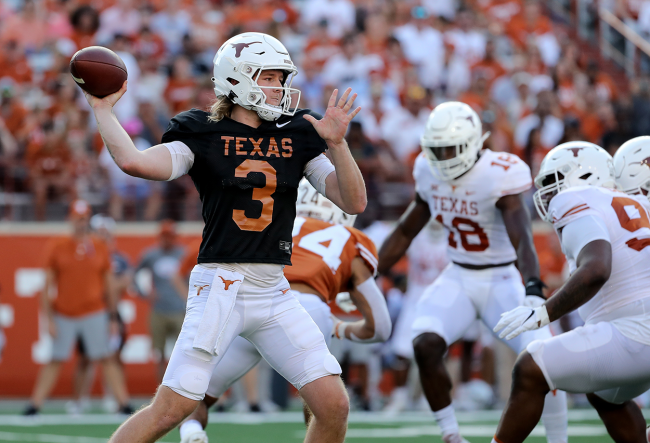 Everything about Quinn Ewers’ transfer to Texas made perfect sense. Anyone who says otherwise is lying to themself.

However, it’s hard not to look at why he decided to transfer and point out the fact that he was not in a position to start at Ohio State in 2022. Buckeyes quarterback C.J. Stroud was a Heisman trophy finalist in 2021 and will be the incumbent starter this year with his eye on being the first quarterback taken in the 2023 NFL Draft.

If Ewers was to have stayed in Columbus, he would have been the backup in in 2022. And then, after sitting next year, he would have had to battle with Class of 2021 five-star Kyle McCord and Class of 2022 four-star Devin Brown (who quickly rose up recruiting boards after an incredible senior season) for the starting job in 2023.

On the other hand, he is likely to be the starter for the Longhorns this fall. He has to beat out upperclassman Hudson Card this summer, but it seems likely that will happen.

Despite the pretty clear role that playing time opportunities likely played in Quinn Ewers’ transfer, he chose not to mention it in his open letter to Longhorns fans in The Players’ Tribune.

On Tuesday morning, The Players’ Tribune published a letter from Ewers that addressed his decision to play for Texas and spoke about the process. The whole thing was very well-written and he was open, honest and candid.

However, he didn’t mention the competition in front of him at Ohio State. Ewers spoke about what drew him to Texas and all of it made sense— from growing up as a Longhorns fan, to a chance to come back and play in his home state.

In particular, he spoke about how difficult it was for the spotlight to be on his every move as he reclassified to enroll at Ohio State and then entered the portal and committed to Texas.

Despite all of the difficulties, Ewers is thrilled with how things worked out.

“It’s hard to make life-changing decisions when you’re only 17 or 18 years old. But this time I really just tried to block out all the noise, and focus on what I wanted for myself. It took a lot of prayer, but I’m confident in the choice I made.”

And he should be. After growing up and playing in Texas, while rooting for Texas as a child, Ewers is going to be the starting quarterback for the Longhorns. That’s really awesome.

But it’s silly not to even mention that the chance to start wasn’t even a little bit of factor!

Now that he is at Texas, Ewers wants his fanbase and the college football world to know that he’s ready to go. He and the Longhorns are ready to bring Texas back, although he admits it might take some time.

“There’s a different type of confidence in the air right now. It’s refreshing, and it’s exciting. It’s Coach Sarkisian’s second year, and everyone’s aware of the expectations. And we all know it won’t happen overnight. But we’re ready to rise to the occasion.”

As for Ewers himself, he can’t wait to get started.

“Y’all should know I’m one of the most competitive people out there. Officially starting my quarterback career as a Longhorn is a dream come true, and I’m prepared to give everything I’ve got to help this program get to where it needs to be.”

Win, lose or otherwise, Texas football is going to be fun to watch this fall. Especially if/when Ewers starts, which was undeniably a big reason that he ended up in Austin in the first place.