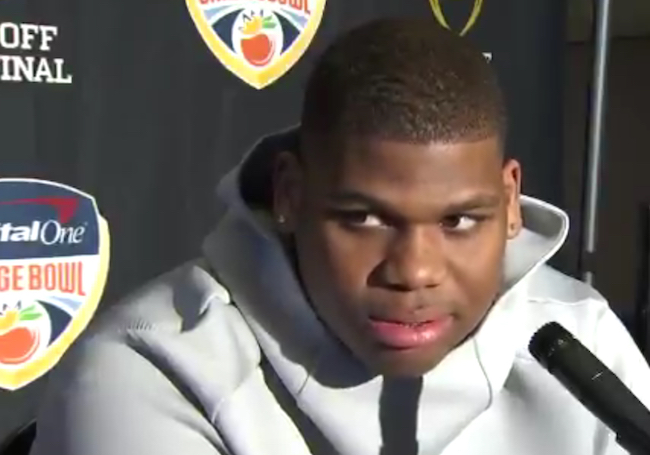 The hardest move for any football player is stopping himself before administering a late hit or doing anything in the middle of a play that could get a flag.

The second hardest move is keeping his lips zipped when asked about opposing players.

Alabama DT Quinnen Williams might need to work on the latter. Sure, he stops himself from throwing shade at Oklahoma QB Kyler Murray before the Capital One Orange Bowl on December 29th, but his recovery if worthy of a flag for being flagrantly awkward.

When asked by reporter Barrett Sallee if he’d ever faced a quarterback like Murray, Williams explains that he personally hasn’t and almost expressed his true feelings about the two-sport star. Then his brain straight-up said “NOPE!”

The “nope” probably sounded an awful lot like Nick Saban.

Quinnen Williams: "I feel like Kyler Murray is not what everybo…"

The throat clearing is everything.

Williams could have finished his sentence and then said something complimentary about Murray. Instead, he chose to just say nothing at all.

Nothing except “Nah, I’m good.”

Well, it’s better than mouthing off and having to say “my bad.”