RACIN’ SZN HERE: Take Your Love For NASCAR To The Next Level With NASCAR’s New Live Fantasy Game 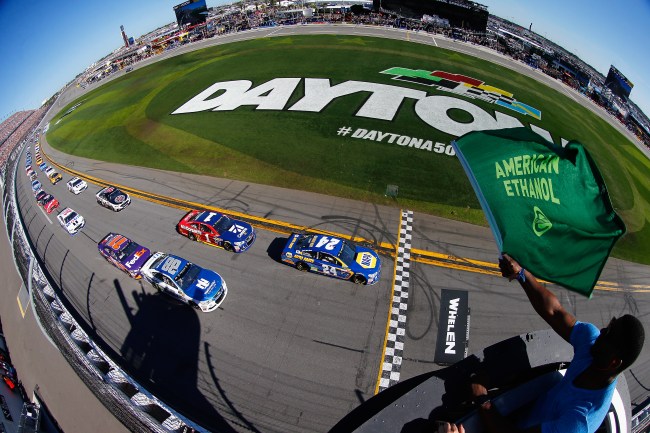 In my house, Daytona 500 Sunday is right up there with Super Bowl Sunday and Selection Sunday as one of the great televised sports Sundays of the year. It’s the perfect excuse to crack open a couple icy cold ones in the cooler I keep next to my couch and munch out to nachos in my favorite a Dale Earnhardt jacket.

After three months of quiet, RACE SZN is back at full throttle for the one of the most legendary races of the year. This year is a big birthday for Daytona, too: Sunday’s race marks the 60th Daytona 500.

If you haven’t been paying attention, there are all sorts of storylines going into this year’s Daytona race: Hatin’ or lovin’ Kyle Busch, Danica Patrick’s last left-turn competition, Chevrolet’s FIVE year domination of winning the pole, Alex Bowman winning the pole for this year’s Daytona race — an insane start for the driver taking the place of Dale Earnhardt Jr. in the No. 88 car for Hendrick Motorsports. There’s also a huge field of young, hungry new NASCAR talent ready to explode on the cultural scene: Ryan Blaney, Chase Elliot. Austin and Ty Dillon.

What I’m trying to say here it this: It’s an exciting time to love the smell of gasoline and high stakes stock car racin’ at 190 MPH.

If you love NASCAR, I can’t recommend Fantasy NASCAR enough. It takes less 5 minutes of your attention every week and keeps you deeply invested in the results of each race. Plus it’s great water cool chatter if you organize a league with your co-workers.

This year NASCAR rolled out a new live fantasy game that allows you to mix things up during the race. In other words, the mobile fantasy era has finally arrived for NASCAR racing.

Here’s how it works, directly from the folks at NASCAR:

-In addition, a sixth “garage” driver on the roster can be swapped in-race for any active driver before the final stage begins.

-Game scoring follows NASCAR official scoring and rewards points based on race results and driver finishing position for all three stages. Only drivers in the “starting” position at the end of each race will earn fantasy points.

-Individual drivers can be used a maximum of 10 times during the season. If a driver ends the race in the player’s garage, it will not count against the season limit. During races, drivers running in the top 10 at the conclusion of Stage 1 and Stage 2 receive points, beginning with 10 points for the stage winner, nine points for second place, eight points for third place, and so on.

-NASCAR Fantasy Live will run throughout the 26-week Monster Energy NASCAR Cup Series™ regular season and culminate with the Brickyard 400® at Indianapolis Motor Speedway on September 9, 2018. The overall points leader after the final race will be crowned 2018 champion and win $10,000.

Go sign-up for FANTASY LIVE over at NASCAR.com. I’m going to try to figure out how to get a private BroBible league started so we can play against each other throughout the season and — maybe — compete for side prizes against each other every week. But first, I have to ask a couple people about the feasibility. So stay tuned for that.

In the meantime, here are my picks for the Daytona 500 on Sunday. I’m really feeling a Toyota family win, but wouldn’t be surprised to see the checkered flag go to a young gun like Chase Elliott. 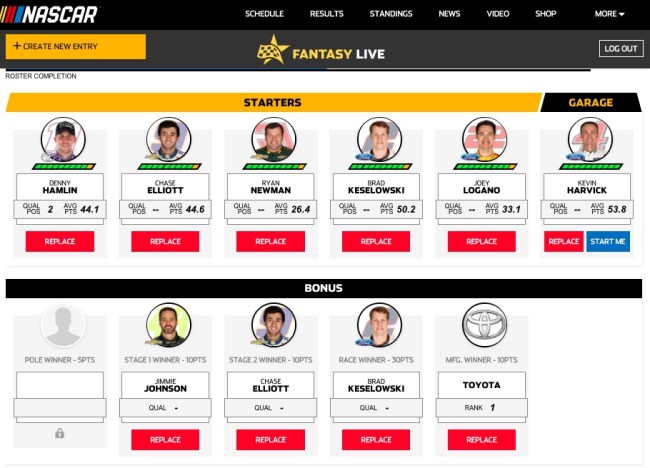