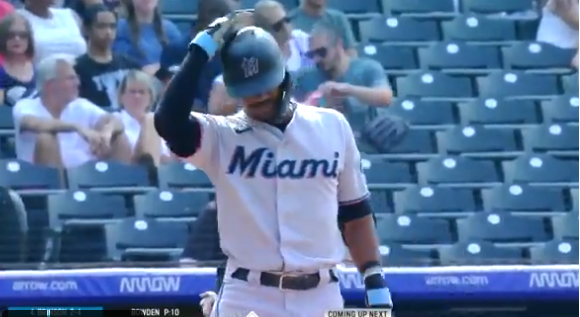 UPDATE: A new video suggests the fan in question was actually yelling “Dinger,” which is the name of the Colorado Rockies mascot.

There was an ugly incident involving a fan during Sunday’s Marlins-Rockies game in Coors field.

At the top of the ninth inning, a fan could be heard loudly yelling the N-word multiple times at Marlins’ Lewis Brinson.

A fan at Coors Field just yelled the N-word at Lewis Brinson so loudly that the Bally Sports microphone picked it up. Absolutely horrible.

That fan should be held just as accountable as the fan who threw a baseball at Verdugo. Ban him.

Fans are now calling for the Rockies to investigate the situation and ban the fan for life from the stadium.

Shouting the N-word at a game? Where is the @Rockies statement on how they apprehended the racist and what they did to him? Where is @mlb’s investigation?

This is a private business and they are responsible for the conduct of their patrons.
pic.twitter.com/LEeJVLmpVz

@Rockies you better go find that fan who yelled that and send him to the shadow of realm https://t.co/hUFF1KQQW9

This is just disgusting. This man needs to be found and identified. Never allowed to step into ballpark again @Rockies. ASAP. https://t.co/5FAr3scg5f