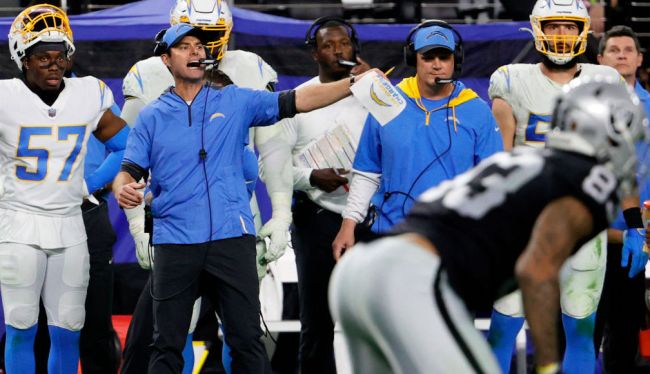 The final game of the 2021 NFL regular season certainly delivered last night, as the win-and-you’re-in matchup between the Las Vegas Raiders and the Los Angeles Chargers literally came down to the last second, as the Raiders kicked an overtime-ending field goal to send themselves to the postseason, which subsequently cost phenom QB Justin Herbert and the Chargers a playoff berth.

It didn’t have to be that way, though, as a tie would’ve seen both teams head to the playoffs, knocking out the Pittsburgh Steelers in the process. A tie was certainly on the minds of the Raiders during their final drive, as quarterback Derek Carr and head coach Rich Bisaccia have effectively admitted that they were playing for a stalemate and that the controversial late timeout from Chargers head coach Brandon Staley is what caused them to alter course.

Derek Carr admits that Brandon Staley calling a timeout changed what happened at the end.

The #Chargers could've been in the playoffs!pic.twitter.com/9mnIQDYI1s

Sure looks like Ekeler asked the Raiders if they were going to kneel it and they said yes..pic.twitter.com/GQaYPHjZ3V

#Raiders coach Rich Bisaccia openly admits Las Vegas was considering to just run the clock out to tie it.

They to see if the #Chargers will call a timeout….pic.twitter.com/dMzgflWnHV

Staley’s timeout was just one of many controversially aggressive decisions he made during both the game and the season at large. For example, trailing by three points with 9:41 remaining in the third quarter, Staley opted to go for it on fourth-and-1 from the Chargers’ 18. The Chargers were stuffed and turned the ball over to the Raiders, who were able to convert the opportunity into three points. The Raiders ultimately won by — you guessed it — three points.

The @Raiders make a 4th down stop at the LAC 18! #RaiderNation

As a result of the Raiders win, the playoffs will begin on Saturday at 4:30 p.m. when Las Vegas, the #5 seed in the AFC, heads to Cincinnati to take on the #4 seed Bengals. Saturday’s action will then conclude with a matchup between the New England Patriots and the Buffalo Bills.

Then, on Sunday, the Philadelphia Eagles will face the Tampa Bay Bucs, the San Fransisco 49ers will take on the Dallas Cowboys, and the Pittsburgh Steelers will visit the Kansas City Chiefs. Finally, on Monday, to close out Super Wild Card Weekend, the Arizona Cardinals will head up to Los Angeles to take on the Rams for the third time this season.

RELATED: Chargers Fans Rip HC Brandon Staley To Shreds For Calling Timeout When It Appeared The Raiders Were Playing For Tie