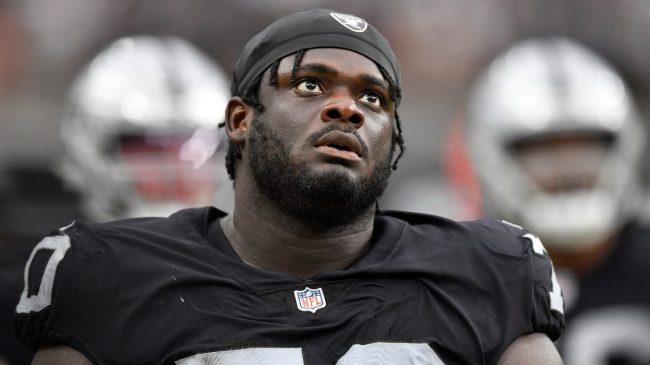 Typically, first-round selections stay with their team until the end of their rookie contracts at the very least. That is not the case for Alex Leatherwood and the Las Vegas Raiders though. Now, the franchise must make up for its mistake while Leatherwood hopes to sign elsewhere.

According to Adam Schefter, the Raiders waived the former first-round pick just over an hour before the 53-man roster deadline. Many players were given the axe on Tuesday, but this is possibly the most shocking. Especially considering the Raiders just selected him in the first round of the 2021 NFL Draft last year.

This is rather shocking news for most of the league, so of course, Raiders fans are going bonkers about it.

This guy, for example, is just venting out what nearly every fan is feeling right now.

NO WAY WHAT THE FUCK

Dane Brugler points out that Alex Leatherwood was a shocking pick within the top 25. Regardless, he claims it’s “still surprising that he couldn’t earn a roster spot, even with a new GM/HC.”

It was a big surprise on draft day when Leatherwood was a top-25 pick. But still surprising that he couldn't earn a roster spot, even with a new GM/HC. https://t.co/UL5nhuNGVA

Some fans aren’t as shocked as others, as they believe it’s simply a change in regime. This Raiders fan calls this move, “The Mike Mayock purge.”

At the end of the day, it’s rather wild to see a team walk away from a first-round pick just a year later. This is all reminiscent of when the Tennessee Titans traded former first-round offensive lineman Isaiah Wilson after he struggled with off-the-field issues. Either way, look for the Raiders to find Alex Leatherwood’s replacement next offseason.