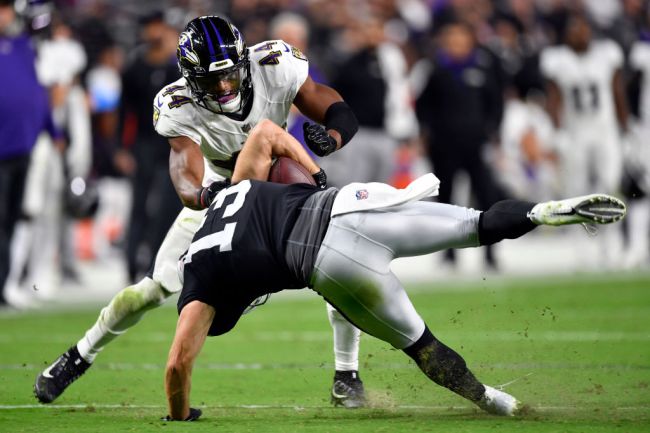 The Las Vegas Raiders are not happy with the Baltimore Ravens and they don’t plan to let them get away with their actions. According to reports, the team has filed a complaint with the NFL over dirty hits on Monday night.

In particular, the Raiders are taking umbrage with illegal hits on wide receiver Hunter Renfrow. The team reportedly compiled a collection of videos that show uncalled hits away from the ball.

The #Raiders, I'm told, have filed a complaint with the league about all the dirty hits on receiver Hunter Renfrow in Monday night's game. Patrick Queen was called for one, but the Raiders compiled video of several after-the-play and away-from-the ball hits.

While it is unclear as to how many hits that the team compiled from its video archive, one play in particular shows the type of hit that team remains upset about. It reportedly “is a big reason [the] Raiders are so upset.”

#Raiders have compiled videos and have filed a complaint to the NFL about the #Ravens delivering dirty and unnecessary hits on WR Hunter Renfrow in Monday game, per @VicTafur. Team claims there are several instances. Here’s one example (bottom of screen) pic.twitter.com/IAYHcx9e20

Renfrow finished the night with six catches for 70 yards and his team ended up with the last laugh on a game-winning Hail Mary. The hits ended up being overshadowed by the incredible finish but clearly, Las Vegas did not forget.

The official complaint could ultimately result in three things—

Las Vegas travels to Pittsburgh in Week 2, perhaps Renfrow will be treated better by the Steelers?