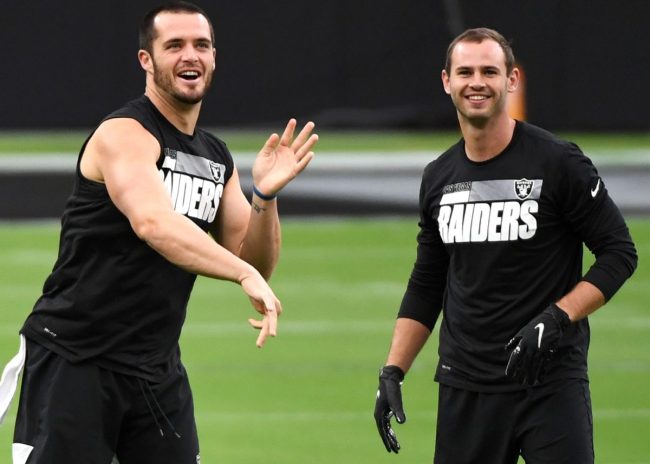 Hunter Renfrow is going viral after making his teammates ride in the world’s tiniest Uber. Of course, it’s possible that all Ubers seem small when talking to NFL players. But he could’ve at least ordered an XL.

A clip of the Raiders’ wide receiver is making its way around social media showing four teammates crammed in a sedan. Derek Carr, Davante Adams, and Mack Hollins were smushed in the back seat while Renfrow sits up front.

Adams took a video of the uncomfortable ride, putting his new teammate on blast.

Adams was traded to Las Vegas over the offseason, where he’ll reunite with college quarterback Derek Carr in Sin City. Renfrow will be in his new receiver room, as will Hollins.

Those three pass catchers combined for more than 2,800 yards last season, which should be welcomed by Carr as he tries to lead the team back to the playoffs next year.

But that brief Uber ride might have Adams questioning his decision to join the Raiders.

Fans were quick to react to the hilarious video on social media.

After seeing the clip of Hunter Renfrow’s Uber request, many added their responses on Twitter. Most are making jokes about the millions of dollars sitting in the car, yet they chose the cheapest option of transportation.

Like 500 million between yall and bro didn't ordered an XL?

Greater than $60M collective AAV in that UBER all scrunched up!!!🤣🤣🤣 pic.twitter.com/iTmvSC2c7l

My boy ain’t got max money yet, chill 😂 https://t.co/6OoBjMCRjL

This is hilarious haha https://t.co/vCnBeKh4vc

Hopefully, Renfrow will order a little bit larger ride the next time around. That is if he’s ever put in charge of transportation again.