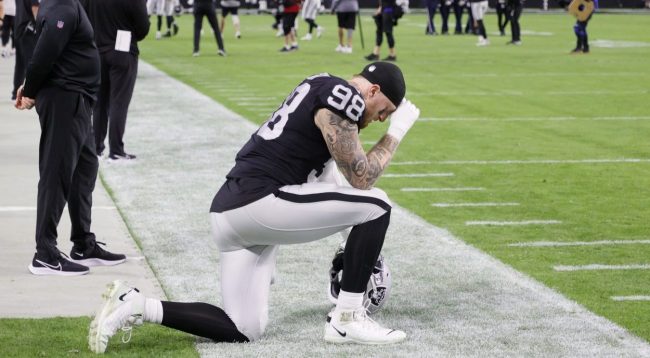 Raiders defensive end Maxx Crosby has had a long journey to get to where he is today. He found out on Monday, nearly two years after being in rehab, that he made the Pro Bowl and his reaction is incredible.

Crosby, a 24-year-old, third-year player out of Eastern Michigan, was drafted by Las Vegas (then Oakland) in 2019. A year later, a week before the world shut down to COVID-19 in the spring of 2020, Crosby checked himself into rehab.

He said that alcoholism runs in his family and that he struggled with drinking and partying throughout high school and college. During his rookie season, his alcohol consumption became too much for him.

Crosby said that he always knew he had a problem and got ahead of it by going to rehab. He spent a month in a rehabilitation facility in Los Angeles and then stayed in a sober living facility until training camp began that summer.

Now, 22 months later, he is and remains completely sober off of the field. Meanwhile, on the field, he is having a career year.

Crosby is a big factor on a Raiders defense that has kept his team’s playoffs hopes alive. Through 13 games, the 6-foot-5, 225-pounder has made 43 tackles, 25 solo, eight for loss and five sacks, as well as five pass breakups and 25 quarterback hits.

As a result of his strong season, Crosby was selected to his first-career Pro Bowl.

He discussed the nod on Monday, shortly after Las Vegas’ win over Cleveland, and got emotional. It was a very special moment for him.

"I was in rehab two years ago. And now I'm in the Pro Bowl."@CrosbyMaxx got emotional reflecting on his unbelievable journey after tonight's win. 🖤 pic.twitter.com/oNvl7PG22n

His comments were a reflection of how hard he has worked.

“It just brought back memories … I was in rehab almost two years ago and now I’m in the Pro Bowl. This is just a blessing, man. I show up and I try to be the best teammate everyday, show my guys that I care.

This hit home, man. This is special. It makes my family proud, my girl, everybody around me is calling, blowing up my phone. I’m crying like a baby because I know I’ve worked so hard, and it’s starting to pay off.”

Crosby also discussed his defensive line coach, Rod Marinelli, whom he described as having a real, positive impact on his play and his life in Las Vegas.

For those who say that the Pro Bowl doesn’t mean anything anymore, Crosby’s story is an example of why that is not true. What a special moment and season for him and his loved ones.