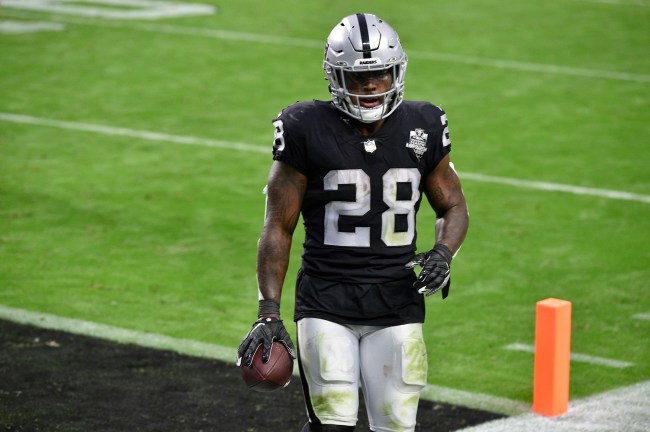 Las Vegas Raiders running back Josh Jacob is having a bit of fun messing with fantasy football owners.

Jacobs’ status was up in the air on Sunday while he’s dealing with an ankle injury that forced him to miss last week’s game. About an hour before the game the Raiders listed Jacobs as active for their game against the Colts.

Despite being listed as active by the team Jacobs took to Instagram to claim that he wasn’t playing today while sending a message to fantasy football owners.

#Raiders’ RB Josh Jacobs is active today, but he posted on his Instagram story that he’s not playing.

And he included a message to your fantasy team on the bottom. pic.twitter.com/0bx8zpFWBV

Jacobs was obviously trolling fantasy owners with his Instagram post because he was seen warming up before the game.

Josh Jacobs is starting for the #Raiders. He was trolling.

Raiders’ RB Josh Jacobs appears to have been joking with the fantasy community and is now going through pre-game warmups. https://t.co/12HDqwxIii

It's pretty wild being a Josh Jacobs fantasy owner today. I just want to know if he is or isn't playing before the game starts.

I’m confused.. is josh jacobs playing or not?

Me, when I see Josh Jacobs is active for the #Raiders, but he posts on Instagram he isn’t playing.

If this is a troll job and Jacobs goes off, he instantly becomes the biggest #FantasyFootball villain of all-time. pic.twitter.com/Ct6J3iCnlB

I need a call is Josh Jacobs playing or no?