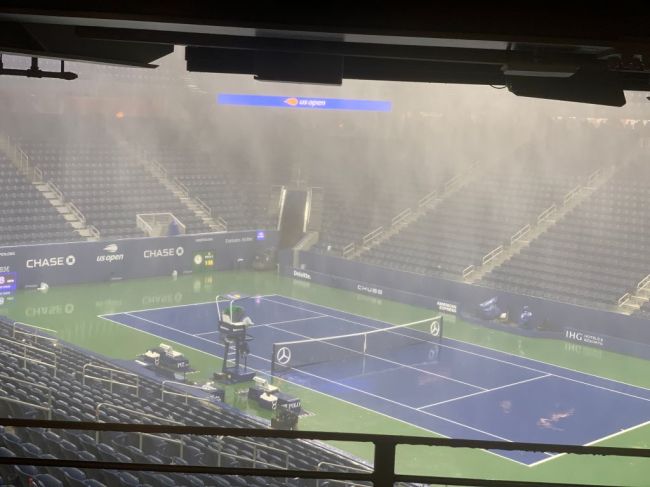 The U.S. Open tennis championship was absolutely hammered by the remnants of Hurricane Ida on Wednesday night. One match, being played indoors, had to be suspended because it started pouring down rain… inside.

A wild video showed just how crazy the weather got in the plaza.

Waiting for Rovell’s tweet about how Heineken got $1M free exposure from this vid pic.twitter.com/2t6p2DWsRq

Kevin Anderson and Diego Schwartzman were in the middle of their second-round singles match when the storm began to seep through the retractable roof of Louis Armstrong Stadium.

Play was suspended shortly thereafter and the rain kept getting worse.

Play currently stopped on Armstrong despite the roof. Rain coming in with the wind. This is insane #USOpen2021 @usopen pic.twitter.com/Nek3NySCyQ

Initially, the plan was for the match to continue and an effort was made to try and dry the courts.

Players are trying to stay warm as the courts are dried. This is nuts! @usopen #USOpen2021 #kevinanderson #USOpenTennis pic.twitter.com/ZCPyuvrzpk

Precipitation began to slow down for a moment and at one point, the players returned to the court with hopes of continuing play.

Players now warming up for play to resume. They were on court throughout the delay. They each left the court a couple of times but came right back within a minute or two. Definitely a weird delay. @usopen #USOpen2021 pic.twitter.com/W0aFZPDyGA

And then the rain and wind came back in even greater force. There was no hope.

Think the @usopen might have to make some slight improvements to Louis Armstrong Stadium’s roof #Tornado pic.twitter.com/KlscX9Rj8e

Crazy scene @usopen on Louis Armstrong Stadium. The roof was no match for this storm pic.twitter.com/HFNTB3R2Ka

As a result of the failing roof — because remember, this match was somehow played indoors — the contest between Anderson and Schwartzman was moved to another (working) roofed stadium and ended just after 1:00 a.m. EST.

Meanwhile, this was the scene at Louis Armstrong. The court was a puddle.

Many people criticized the U.S. Open for its decision to continue play despite the inclement weather, flash flood warnings and tornado warnings in the area. However, the tournament went on and all of the matches were played as scheduled.

When those who decided to stick around finally went home, it was quite the scene.

New York City suspended all transportation in and out of the city and then declared a state of emergency on Thursday morning. Subways remain flooded after wild scenes and quite a few people were left without a way home.

The scenes were unfortunate. But with the decision to push through the storm, the U.S. Open will not have to extend its schedule or adjust its plan.