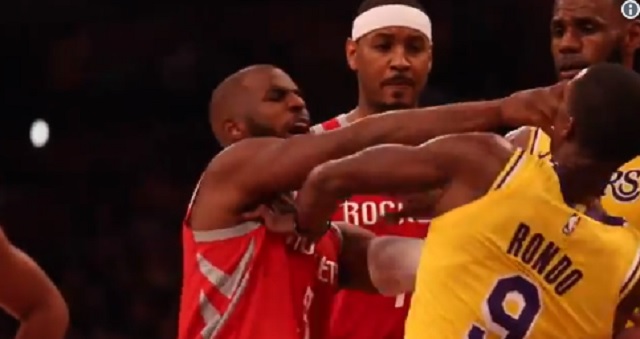 Late last night during the Lakers-Rockets game a fight broke out between Chris Paul and Rajon Rondo after Rondo spit on Paul.

According to various reports, Rondo’s girlfriend also got heated with Paul’s wife in the stands.

They weren’t Savannah and Jada were sitting next to one another and Rondo’s significant other was sitting behind them https://t.co/ucvUmUumzs

In the end it appears that Rondo did indeed spit on Paul and is facing a lengthy suspension.

This is one of the pieces of video the Rockets are sending the league office as the NBA investigates last night's fight at Staples Center and determines discipline. pic.twitter.com/YKw7JF13cP

Whatever case Rondo's making, NBA is evaluating a video clip captured courtside that shows saliva/spit shooting from Rondo's mouth onto Chris Paul's face. It appears Rondo will have to sell league on fact that it was unintentional — and that appears to be a tough case to make. https://t.co/ddrhhHuxnN

Sources: NBA's expected to learn two things on case Lakers/Rajon Rondo will make to league: Rondo suffered a cut/scratch under right eye from Chris Paul, which Rondo contends provoked him. Also, Rondo used a mouthguard, which presumably would complicate alleged act of spitting.