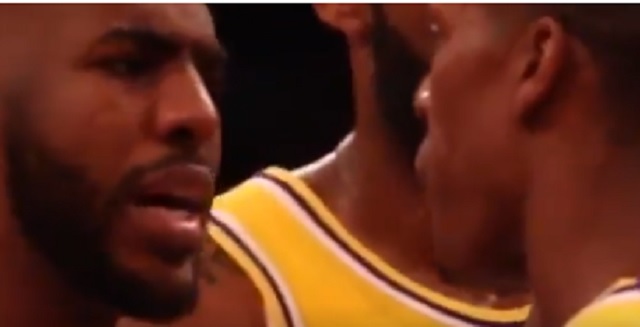 A wild brawl broke out late last night between the Lakers and the Rockets when Chris Paul and Rajon Rondo began throwing haymakers at each other.

Chris Paul contended that Rondo spit on him before he decided to put his hand in Rondo’s face. Rondo immediately denied Paul’s allegations.

Sources: Lakers officials watched tape and are backing Rajon Rondo’s contention that he didn’t spit on Chris Paul. Meanwhile, CP3 and Rockets are insisting that Rondo did spit. “Lot of history between them,” one source connected to both players says.

Paul’s teammates backed up his claims and told the media that Rondo did spit on CP3.

So multiple Rockets say Rondo spit at Paul. The Lakers say he didn't. NBA will investigate every moment, but I suspect Roger McDowell was a second spitter.

We now have close-up footage of the incident and it definitely shows Rondo spitting on CP3.

The NBA is aware of the footage and is using it in their investigation.

Whatever case Rondo's making, NBA is evaluating a video clip captured courtside that shows saliva/spit shooting from Rondo's mouth onto Chris Paul's face. It appears Rondo will have to sell league on fact that it was unintentional — and that appears to be a tough case to make. https://t.co/ddrhhHuxnN

Rondo is still contending that he didn’t spit on Paul.

Sources: NBA's expected to learn two things on case Lakers/Rajon Rondo will make to league: Rondo suffered a cut/scratch under right eye from Chris Paul, which Rondo contends provoked him. Also, Rondo used a mouthguard, which presumably would complicate alleged act of spitting.