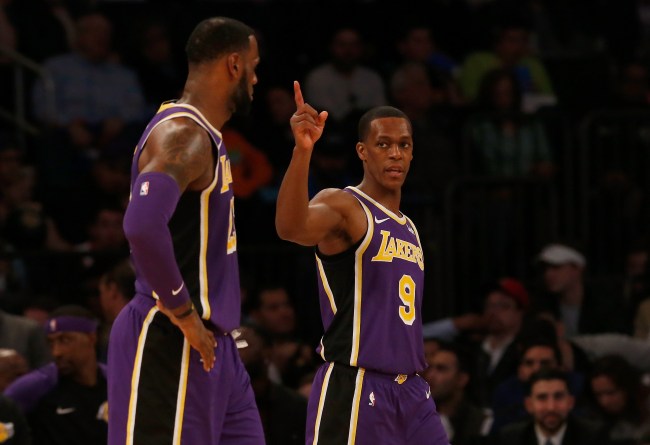 Earlier this year before the trade deadline the LA Lakers made an aggressive push to try to acquire Pelicans superstar Anthony Davis. The Lakers basically offered up half of their team to the Pels for AD.

Many felt that LeBron James and his pal Rich Paul, who represents Anthony Davis, tried to orchestrate the trade behind the scenes and according to Rajon Rondo that bothered many of the young Lakers players who grew up idolizing LeBron.

“Every guy on our team, LeBron was their favorite player growing up,” Rondo says. “Everyone had the shoes, his jersey. You’re the biggest fan in the world. It’s like you’re playing with MJ, and then you get there, and it’s like your mom and dad, or the person that you looked up to and idolized, doesn’t want you. And then to have that sitting in your gut, not knowing.”

Rondo would go on to say that he advised his teammates to not focus on the rumors.

I can’t say a name, but I remember me and the guy were on the bench for the Atlanta game right before the [All-Star] break. The guy was cussing and talking bad about the situation during the game. I was like: ‘Snap out of it. That shit is over with. We’ll get through it. As vets, we have to move forward and not focus on what the young guys are focusing on.”

We’ll see how the Lakers how the trade situation this offseason and if it rekindles more resentment towards LeBron from his teammates.