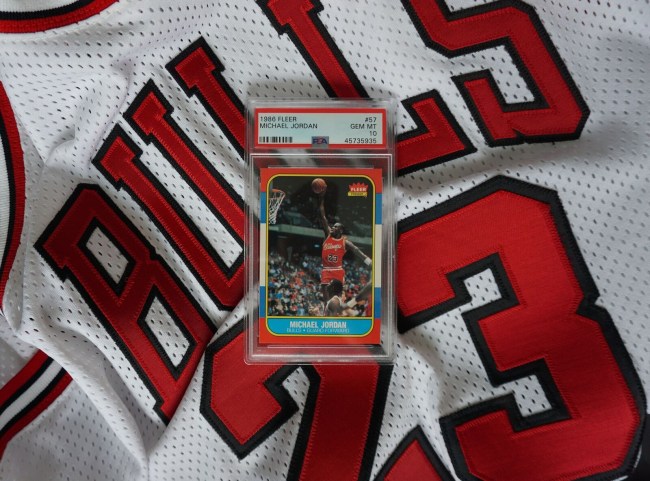 One of the most exhilarating experiences you can have as a kid is waking up at an ungodly hour on Christmas morning to tear the wrapping paper off of your presents before subsequently ripping open the packages containing your surprises, and one of the most depressing parts of being an adult is looking back at those moments and realizing how rich you could’ve been if you’d only exercised some self-restraint.

Anyone who’s spent more than 17 seconds on the internet knows that nostalgia is big business but websites with a model that largely revolves around pumping out quizzes so 90s Kids have a way to see if they have early-onset dementia are only the tip of the iceberg when it comes to mining our childhood memories in search of a solid payday.

People who stockpiled Beanie Babies in the hopes of leveraging them into an early retirement didn’t exactly see things pan out the way they were hoping but there are plenty of other things from our youth—ranging from the action figures you tore the arms off of or the holographic Charizard card you lost on the bus—that would be worth a staggering amount of cash today if you had allowed them to sit unopened in a dark and dry place for a couple of decades instead of opening them up and using them for their intended purpose like the big, dumb, stupid idiot you are.

It seems like everyone has a horror story about coming home from college to discover their parents threw out a shoebox full of baseball cards along with the empty cans of Natty Light and expired condoms that were stashed inside their bedroom closet, leaving them with nothing to do but think about the potential treasures that will spend their remaining days slowly decomposing in a landfill.

Sure, you probably wouldn’t have too much trouble replacing that Raul Mondesi rookie card if you really wanted to, but if you want to get your hands on a piece of sports memorabilia with a connection to an athlete people haven’t pretty much forgotten about entirely, the barrier to entry is much, much higher.

However, if you’re content with simply owning a piece of one of those pieces, there’s an easy—and dramatically cheaper—way to gain entry to an otherwise exclusive club.

In 2017, Rob Petrozzo and a couple of his buddies introduced the world to Rally, an app that allows users to buy shares in unique items typically sold to people who don’t feel out of their element in an auction house where bids go up in increments that can dwarf the typical person’s monthly paycheck.

I recently spoke to Petrozzo as he was gearing up for the launch of the company’s newest offering: a certified mint-condition card produced by Fleer for Michael Jordan’s 1986-87 season, which is the closest thing you’ll ever come to finding one from his actual rookie year, as card manufacturers had yet to enter that space when he first started playing in the NBA. 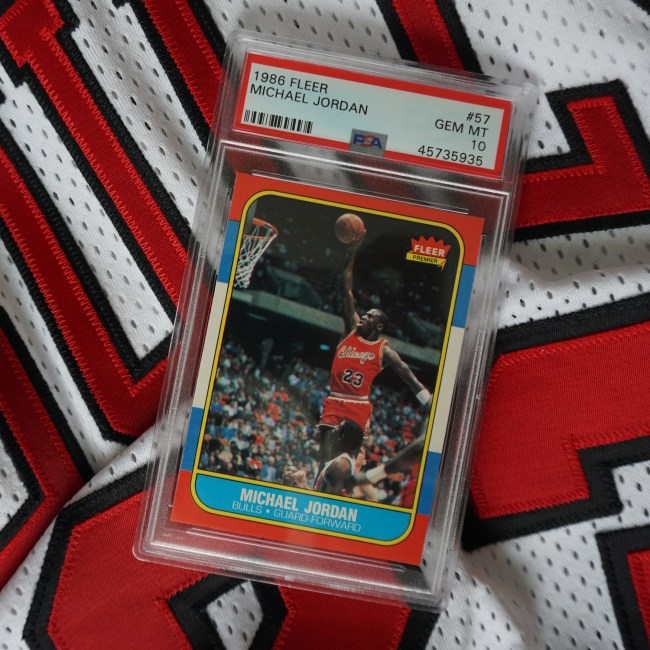 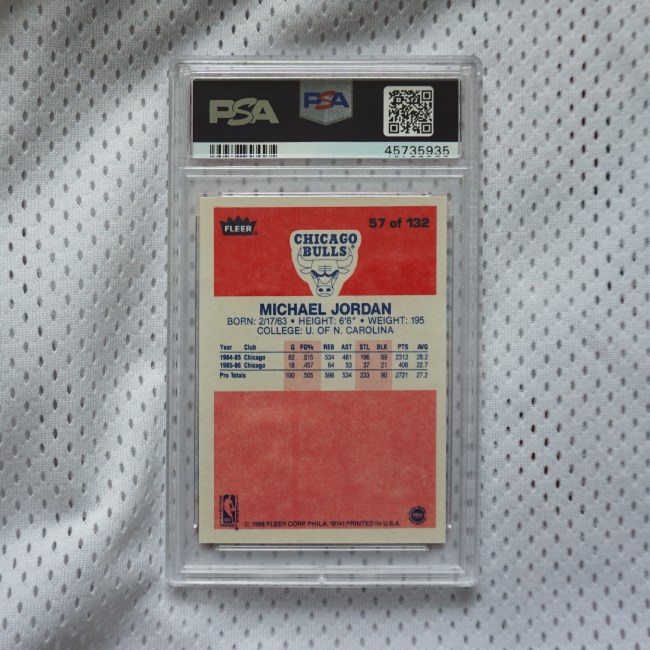 Rally was founded with the egalitarian vision to make it possible for “normal” people to invest in luxury items typically reserved for members of the public with more money than they know what to do with. At first, the company set its sights on high-end cars, a sphere Petrozzo says many enthusiasts can only invest in emotionally:

“It was the one area that had the biggest differentiation between the haves and the have-nots. The enthusiasts that really care were relegated to the sidelines; watching these cars come across the auction block but not really having any skin in the game.

When it came to cars, we found that there’s usually a 13-year-old who sees a headline about a car and knows more about it than the person who owns ten of them stashed away somewhere. It might have a great story, but to the person that owns it, they think about it as just this financial instrument in a garage with 200 other ones like Jay Leno.”

As the app continued to gain traction, Rally began to expand its horizons by offering stakes in expensive wines and watches. Before long, it had added some pieces of sports memorabilia to its portfolio (and, in turn, those of its investors) in the form of a 1952 Topps Mickey Mantle card and the iconic Honus Wagner T206, the latter of which was listed at a value of $520,000 and saw all of its shares scooped up seven minutes after they were initially offered.

Rally harnesses an 18-point checklist when evaluating the potential upside of the assets it acquires, and after examining the landscape, it became clear that there was just as much potential for a sizeable return when it came to items with a connection to athletes its typical user was actually able to see play in their lifetime.

When it came to testing this theory, they didn’t have to think too hard about who the guinea pig would be:

“We started trying to acquire as many Michael Jordan assets as possible. That started with a pair of Jordans 3s that he wore during a couple of games during the ’88 season and that led to the game-worn jersey he had on when he made his 5000th assist.”

Rally offered 2,000 shares of each of those autographed items—ones for the sneakers initially went for $11 while the jersey started at $64 a pop—and it took less than a minute for all of them to be claimed. As a result, it wasn’t a question of if more Jordan memorabilia would be obtained but rather what that item would be, and the answer came in the form of the card that will hit the market at 12 PM EST on Friday, May 8th.

Petrozzo provided some background information concerning how a small piece of cardboard managed to become so valuable, saying:

“This card was meaningful when we were younger, but it was something that started to take off in terms of value in the last 18 months or so. It was something that you could have gotten for maybe $18,000 a year-and-a-half ago, but since then, it’s sort of taken on a life of its own.

When this card came out, it wasn’t necessarily looked at as the most interesting card, but that’s the case with a lot of stuff from the ’80s. Back then, a lot of things were just starting to be mass-produced. When it actually did come out, it was printed on a mass scale. It wasn’t something that was super rare at the time.

What happened is that it was one of those cards that got put into people’s bicycle spokes. It was also printed in a different way than cards were in the ’60s and ’70s. It was that brand-new offset printing method that let them pump out a bunch, so to get one that was perfectly centered and wasn’t stuck to another card inside the pack that ended up in the hands of a real collector as opposed to someone like me—who tore it or traded it to someone else—was tough.”

Rally is offering 1,000 shares of the card priced at $40 each (which equals a valuation of $40,000 if you don’t like doing math), which is interesting when you consider Petrozzo noted another one currently being sold in an online auction has already topped the $52,000 mark.

However, he provided some insight into the price that ultimately was decided on, saying:

“We purchased this one from an individual collector seven months ago. Every contract for the assets we acquire—all of which our company also invests up to 10% in because we want to have a stake in their success—is run past the SEC. The card was valued at $40,000 at the time and that’s what we’re selling it at. There are ones on eBay right now that are being priced at over $100,000 in anticipation of where it might go but that doesn’t represent the current market.”

Petrozzo stressed that he—like everyone—can’t predict what the future holds for the value of the card (or anything in Rally’s portfolio), and while he acknowledges the success of The Last Dance and the circumstances that led to its early release have likely played a role in a renewed interest in Jordan memorabilia, those factors certainly weren’t in mind when the initial purchase was made last year.

He also offered some interesting insight into the power of the NBA legend’s personal brand as it relates to the overall markets Rally monitors, saying

“When it comes to demand, Jordan memorabilia is a lot like Ferraris from the ’80s and ’90s, which is funny because he was known for the Testarossas with the vanity plates. Everything from that point in time is super hot right now and people who are in their early 30s aren’t necessarily looking at their 401(k) and saying, This is where I want to have all of my money.’

Now, you can start with Michael Jordan and maybe go from basketball to classic cars from that era and then to watches—maybe the gold Presidential Rolex, which Jordan also loved.”

If you’re interested in any of those spheres, Rally has plenty of assets you can own a chunk of but none of them top the most expensive item in the company’s portfolio, which many people assumed was lost to history until a couple of years ago:

“Our most valuable asset right now is one of the two existing 1980 Lamborghini Countach Turbos. It’s trading around $700,000 right now. It comes with a great story. This was a car that was representative of ’80s excess in every possible way. It’s cherry red, it’s got huge tailpipes, it’s got a twin-turbo engine in the back of it.

At one point, people weren’t sure it even existed because it went missing for 30 years. We were originally looking for a white Lamborghini Countach like the one from Wolf of Wall Street. We sent somebody to an estate sale in Nevada to take pictures of a bunch of different Countachs and in the back of them there was a red one with “Turbo” on the bottom of the quarter panel.

He was like, ‘I think this might be that missing Lamborghini.’ We had to make a crazy offer with a bag full of cash to the owner to take that out of the estate and bring it to New York.”

If you’re looking to obtain some degree of ownership in Jordan’s rookie card when the sale begins on Friday, you’ll have to download the Rally app, where you’ll be able to get some more background information and take a look at some of the technical details. Once it goes live, the “Invest” button will appear and you’ll need to enter some of the same personal information you’d provide if you were buying traditional stocks, which will then lead to you getting the opportunity to buy as many shares as you want.

Once the sale is done, you’ll have to endure an SEC-mandated 90-day waiting period before you can attempt to offload it for your desired amount on the secondary market where all of Rally’s other assets are bought and sold. During that time, they’ll continue to provide you with any news that could impact the value and keep you posted on what price comparable items have sold for on other platforms.

Finally, if your parents still haven’t thrown out your childhood memories and you happen to discover something you think may have some value, Rally can also help facilitate sales with the aid of the advisory board it uses to acquire and evaluate potential holdings.

Sadly, they do not appear to be interested in Raul Mondesi rookie cards—regardless of how mint their condition is—at this time.