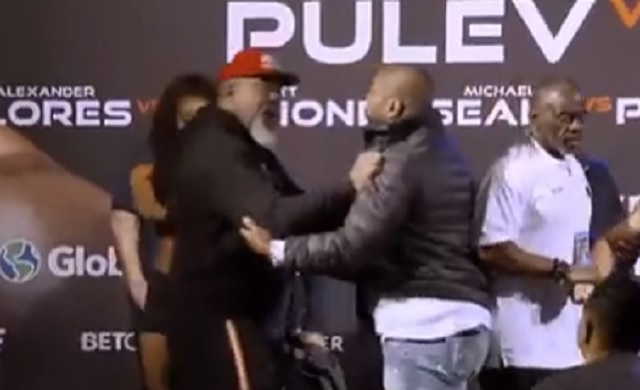 Former UFC champion Rampage Jackson and former heavyweight champion Shannon Briggs are serving as coaches for this weekend’s Triad Combat event that pits boxers and MMA fighters in a triangular ring but it’s clear that the two are on a collision course to fight each other in the future.

During Friday’s Triad Combat weigh-ins, Rampage and Briggs nearly got into it when MMA fighter Derek Campos slapped boxer Brian Vera during a heated face-off at the weigh-ins.

This isn’t the first time Jackson and Briggs nearly fought each other this week. Just a few days ago Rampage and Briggs got into a heated confrontation backstage at Triad Combat’s press conference.

You can watch this weekend’s Triad Combat event featuring Rampage Jackson and Shannon Briggs as judges on Saturday, November 27th on Fite TV.