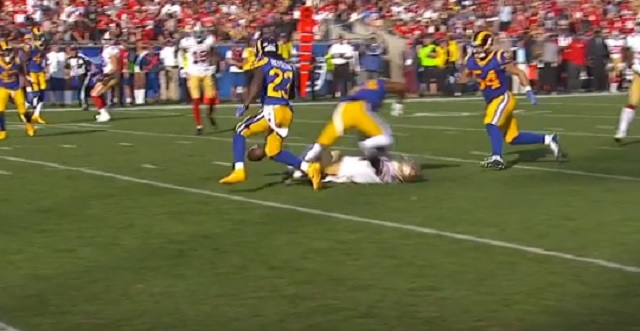 The LA Rams are set to play in a wildcard playoff game next week but they might be without backup cornerback Blake Countess after he delivered a vicious helmet to helmet hit on Marquise Goodwin in the second quarter of today’s Niners-Rams game.

Countess was ejected from the game but it appears he could be suspended as well.

Countess delivered a vicious hit to the head of 49ers receiver Marquise Goodwin, drawing a penalty flag and knocking Goodwin out of the game. Goodwin, who has a history of concussions, was carted off the field.

The hit was absolutely worthy of a suspension, and it won’t be at all surprising if Countess isn’t allowed to play next week. NFL suspensions are never easy to predict, but players have been suspended for less.

Countess is a backup who has played in all 16 regular-season games for the Rams this season. He may not play in the playoffs. And Goodwin’s season is certainly over, and given his history of concussions, he may have to think long and hard about his playing future this offseason.

After watching the video a few times it appears that Goodwin ducked his head at the exact moment Countess went to tackle him. We’ll have to wait and see what the NFL decides to do with Countess next week.