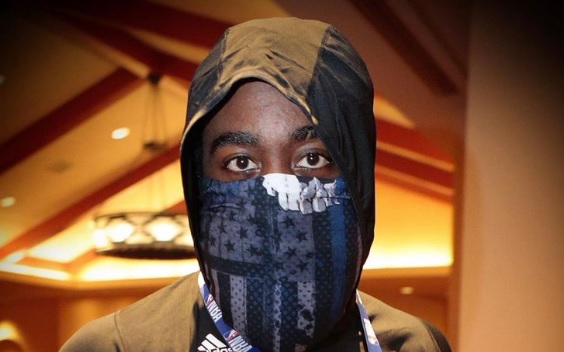 Rockets guard James Harden faced some backlash on Thursday night for wearing a pro-police thin blue line facemask and may have started a rap beef in the process.

After arriving to the Disney Bubble, Harden took a picture for the NBA’s official account that featured him wearing the facemask that has been a symbol of support for law enforcement.

Here’s a description of the mask Harden is wearing.

Harden was immediately criticized by people who support the Black Lives Matter movement including Trey Songz, who used some strong language to call out Harden.

This certified clown shit. I’ll say it for everybody who scared to. FOH https://t.co/pVRMaL9dPG

Young Thug, who is close to Harden, fired back at Songz for not giving the Rockets guard time to explain himself for wearing the mask.

Harden has yet to comment on if he intentionally wore the mask but it is worth noting he showed his support for the BLM movement earlier today.

James Harden on how Houston handled the protests for the late George Floyd:”The way the city rallied,it was amazing.I think the world saw it. How so many people could come together..Obviously it was for a tragic reason.The marching&everything we’re standing for is very powerful” pic.twitter.com/7NTkL90l2D