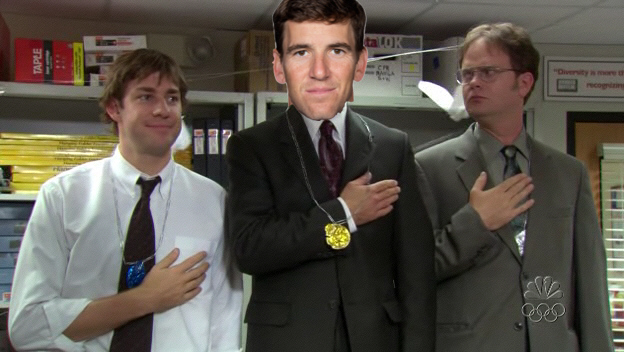 Eli Manning stole two Super Bowls from my dead, lifeless hands and I literally could not tell you one tangible thing about the man as a human being.

Fifteen years behind center in the biggest market in America and I know more about Odell Beckham’s fetishes than I do Eli’s general outlook on life.

Thankfully, that changes now, as we sat down with former NY Giants running back Rashad Jennings on our Endless Hustle Podcast to pull back the curtain on one of the biggest anomalies in sports since Bobby Boucher.

Jennings, who played three seasons with the G-Men and is now a successful children’s book author, discussed everything from the Manning’s dry sense of humor to his level-headedness to his reaction to all those unflattering sideline photos where it looks like extraterrestrials are downloading his brain.

Yes @EliManning DID see all of those memes making fun of him! Former @Giants @RashadJennings talks about their friendship and why #EliManning could star on @theofficetv on the next episode of Endless Hustle Podcast.

“He’s a jokester. He’s one of the biggest jokesters I’ve ever met. He can be in the TV show The Office. He could go on that show, not take one acting class. All they have to do is say, ‘Eli, be you’ and he would fit right in.

His dry humor and quirkiness fits that show so much.

Watching a leader, right? One of the greatest quarterbacks who played in New York. He’s going to be a Hall of Famer. To watch his mannerisms and how he handles things, he’s such a goof!

But he never tried to change who he was and that’s what I love about him, man.

He’s a genuine guy. He’s a good friend. He’s a prankster. And we have a joke that’s currently going on for three years and this dude has no idea.”

“My position is right behind him in shotgun at all times.

Sometimes I feel like me and him both knew that the play call wasn’t going to work, cause I can see what he’s seeing.

In certain times in a pass play where I could see the deepest coverages are already in place to stop us, and as he’s going through his cadence, ‘BLUE 80!,’ I was his dump off.

Soon as he said “hike” all of the commotion, TV people talking, so ya’ll can’t hear this.

He’s be like “Hike, Shad, get open!” because he knows everything down the field ain’t going to work. So I would fake block and then just get open. And then all the sudden he’d just dump it, and the commentator would be like, ‘Oh, Eli went through his progressions so quick!’

“He’ll laugh. I pulled up a couple before and he’d look at it like, ‘That’s a good one, (Skeeter from Doug laugh) Ha-ha.’

Nothing phases him at all. He marches to his own beat.

I don’t know who’s on the drums, but he’s definitely moving to it and I love it.”

Ok, I’m getting carried away.

***Check out our entire interview with Rashad and UFC Godfather Chuck Liddell on this week’s episode of Endless Hustle.***

>Chuck Liddell Interview (9:21 -1:08:42)
-Where his long-standing beef with Tito Ortiz stands today
-The most painful injury he’s suffered in his career
-His take on where Conor McGregor has taken the sport he helped popularize.