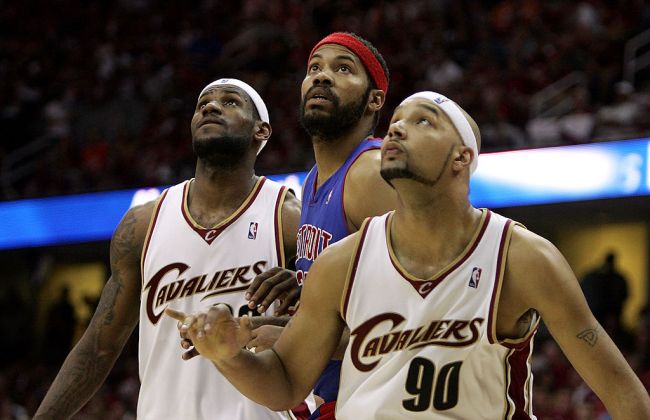 Rasheed Wallace made some interesting comments about LeBron James that set off the Internet.

During a recent episode of the podcast “Million Dollaz Worth of Game”, Wallace said that he doesn’t believe LeBron would be as successfulas he is now if he played during his era.

“He probably would’ve done good with his physical stature, with him being bigger than the majority of the rest of the players,” Wallace said on a recent podcast appearance. “So he probably would’ve held his own, but I don’t think he would be as successful as he is now. It’s a whole different era back then. I couldn’t necessarily say that he would’ve been a beast but I think he would’ve held his own.”

Wallace’s comments are a bit strange considering LeBron helped dismantle his Pistons team in the mid-2000s.

Fans immediately reminded Wallace of how LeBron would dominate him and the Pistons every time they plated.

Is Sheed going to act like we all didn't see LeBron score 25 points in a row against his Pistons. https://t.co/CjZvg8yx46

“Lebron in rasheed’s era vs him” 😂😂😂😂 dawg lebron been dominating so long mfs forget “oh shit I was playing vs this nigga. Foh with ya biased takes man lebron stomped on the pistons and Celtics reign in the east end they still hate to this day. MAN WAS 22 YRS OLD pic.twitter.com/4pqA3u6kqt

More than 14 years ago, a much, much sh*ttier version of LeBron single-handedly beat a 32-year-old Rasheed Wallace and a Pistons team that was one year removed from having 4 all star selections lol. https://t.co/bYthlU9orv

There’s literally a picture of them playing TOGETHER 🤦🏾‍♂️ https://t.co/Tnew5odxJT

dudes doing "back in my day he wouldn't have been shit" about guys they actually played against is a good bit tbh https://t.co/DwWkOn10OO