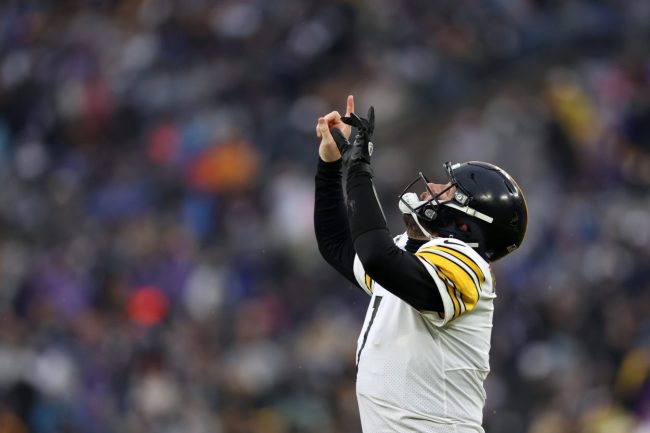 Sunday’s game against the Baltimore Ravens marked what is likely Ben Roethlisberger’s final regular season game in the NFL. Although he has not officially announced that he plans to retire at the end of the 2021/22 season, Big Ben has made it abundantly clear that is what he plans to do.

As a result, the final regular season game of his 17-year career came against his AFC North rivals.

Prior to the game, the Ravens paid tribute to their nemesis, kind of. Instead of a salute to the Steelers quarterback, the team played multiple highlights of Roethlisberger being sacked by Baltimore throughout his career.

The Ravens with a pregame tribute video to Ben Roethlisberger

(aka a compilation of what feels like every bone-crushing hit the Ravens laid on the QB, an emphatic WE DON'T LIKE THEM from Terrell Suggs, capped off by Ben walking off with blood dripping from his broken nose)

And then the Ravens did it again during the fourth quarter.

The Steelers have played the song “Renegade” by Styx in the second half of home games since their playoff win against the Browns in 2002. It has become Pittsburgh’s unofficially official team song and they use a highlight video to get the players and the fans pumped week-in and week-out.

During Sunday’s game, the Ravens did something similar. Except it was just videos of Big Ben getting absolutely crushed.

Entering the game, Roethlisberger knew exactly the type of reception he was going to receive. So, in some ways, it was fitting that the Ravens paid tribute to him in such a way.

In the end, however, Big Ben got the last laugh. He had a 16-10 record against Baltimore coming into the game.

After Sunday, make it 17-10. The Steelers beat the Ravens 16-13 on a walk-off field goal in overtime to officially eliminate Baltimore from the playoffs.

CHRIS BOSWELL FOR THE WIN IN OVERTIME! #HereWeGo pic.twitter.com/07xZL67eiK

Fans of the black and purple will not be sad to see him go.