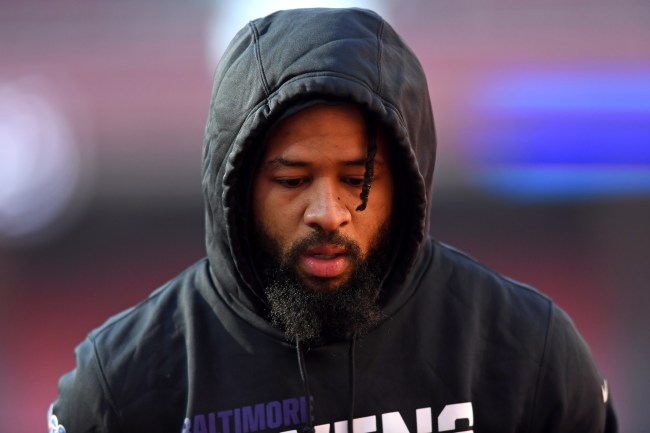 Ravens DB Earl Thomas is lucky to be alive after getting into a serious altercation with his wife when she allegedly busted him cheating with another woman.

According to a report by TMZ, Earl’s wife Nina Thomas was arrested when she was seen chasing her husband with a knife.

The Austin Police Dept. responded to a home in the Austin, Texas area at 3:41 a.m. after getting a call about a disturbance.

According to Nina, she saw Earl getting cozy with another woman in a snapchat video. She then tracked down Earl via Snapchat locations to a nearby Airbnb.

Nina claims Earl, 30, left their home earlier in the day after an argument over the NFL player’s drinking. She claims Earl’s brother, Seth Thomas, picked him up.

But, a short time later, she decided to check on his whereabouts by logging into his Snapchat account — and that’s when she says she found video of Earl with another woman.

Nina says she used Earl’s Snapchat account to track his location to a nearby Airbnb rental home … and says she called up two other women to help her confront Earl at the pad.

Nina went to location with a gun and then pointed at Thomas’ head when she found him and his brother in bed with another woman.

Nina also claims she grabbed Earl’s pistol, a 9mm Berreta, in the process with the intention to “scare him.”

When the women arrived at the house, they “discovered Earl and Seth naked in bed with other women.”

That’s when Nina admits she pulled out the gun and put it to Earl’s head — stating “that she took out the magazine thinking that the gun could not fire.” But, cops say Nina was “unaware that the gun had a round in the chamber.”

Cops say one of the women in the house shot cell phone video of the incident … which they say shows Nina pointing the gun at Earl’s head “from less than a foot away and it can clearly be seen that Nina’s finger was on the trigger and the safety is disengaged.”

Fortunately for Earl, cops say the Ravens defensive back was able to wrestle the gun away from her.

In an interview with Earl’s alleged mistress at the scene, she claimed Nina also threatened her and the other woman in the house — pointing the gun at them and yelling “I got something for all you h***!”

Earl tried to get ahead of the TMZ story by releasing a video on Instagram to address the incident with his wife.

It’s really not anybody’s business. It’s pissing me off that it got out, but that’s the world we’re living in today,”

“Instead of talking about us, just keep us in your prayers. Stuff like this happens. We try to live the best lives we possibly can, but sometimes it doesn’t go as planned. Just pray for us as we go through this stuff.

“We’re back talking, I’m seeing my kids, so just keep us in your prayers.

Nina was charged for burglary of a residence with intent to commit aggravated assault with a deadly weapon, family violence, and was told she had to be 200 yards away from Earl and his mistress. Nina has since bonded out according to TMZ.