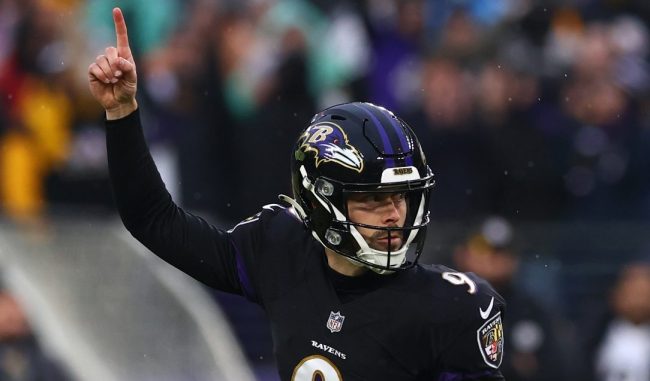 The Baltimore Ravens are shaping up to be one of the best teams in the NFL this season. They are stacked on both sides of the ball and will be competitive as long as the team remains healthy. However, all eyes are on the Ravens’ special teams on Monday after Justin Tucker signed a massive contract extension. Now, fans react to the big deal the best kicker in the league just signed.

According to Ian Rapoport, the All-Pro kicker agreed to a four-year $24 million extension with $17.5 million guaranteed. Justin Tucker is now the highest-paid kicker in the NFL and deservedly so. He’s been an absolute beast throughout his career and is easily the best kicker the league has ever seen. Now he’s being compensated as such.

The #Ravens and All-Pro K Justin Tucker agree to terms on a 4-year extension that pays him $24M, source said with $17.5M guaranteed. The new highest paid kicker.

Fans across the league couldn’t help but share their thoughts on Tucker securing the bag. It’s not every day a kicker receives a huge contract extension like this, however, he’s been incredibly clutch throughout his career. The Ravens likely made the right choice, and most of the fanbase is all about it.

Once it’s spread out, I think it becomes worth it when you realize how much he’s actually put you in a position to win, over the years. https://t.co/7WijZzWYzi

Worth every damn penny. 🐐pic.twitter.com/J3rh2PwYtS

Just Tucker is so good he could receive an extension and be inducted in the Hall of Fame in the same day and I wouldn’t bat an eye.

So, it looks like the Ravens made the right choice in extending Justin Tucker. With a talented offense, a stacked defense, and the most clutch kicker in football, Baltimore is ready to make some noise in the 2022 NFL season.