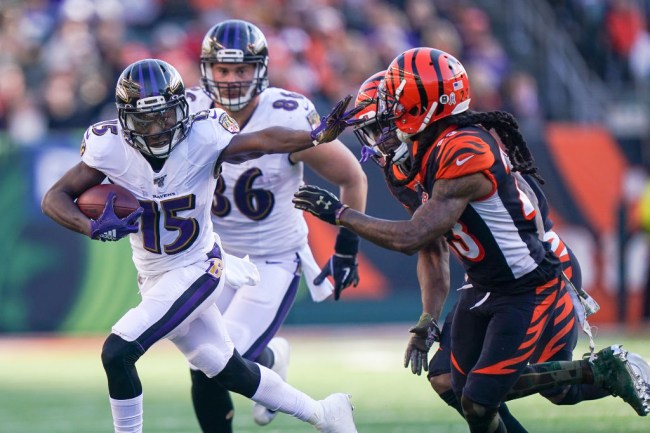 Heading into his rookie year last year with the Ravens, Marquise ‘Hollywood’ Brown was known for two things: being insanely fast and being undersized for the wideout position.

Size wasn’t necessarily an issue for Brown as he hauled in seven touchdowns and nearly 600 yards receiving in 14 games as a rookie. Having said that, putting on a few pounds likely wouldn’t hurt anything when it comes to his game so that’s exactly what he sought after to do this offseason.

Brown managed to put on 23 pounds in just two months.

“I feel 100 times better than I did last year,” Brown told ESPN. “All I’ve got to do now is focus on plays instead of focusing on my feet.”

Brown stuck to a 4,000 calorie diet to put on the weight which included a lot of hard-boiled eggs, protein, and peanut butter.

Hollywood Brown put in 23 pounds in two months to get ready for this season.

Here's how he did it with six clean meals and 4,000 calories per day 😳 (via @jamisonhensley) https://t.co/7a1uA9Ywk9 pic.twitter.com/TuwZh1A9Jf

“That was a happy moment when you get on that scale and you’re like, ‘I’m at a weight I’ve never been before,'” Brown said. “I don’t feel any of the weight. I just feel more powerful.”

A scarier, and still unbelievably fast wide receiver at Lamar Jackson’s disposal? Yep, the rest of the AFC should be on notice, Brown and Jackson could take a giant leap this upcoming season.