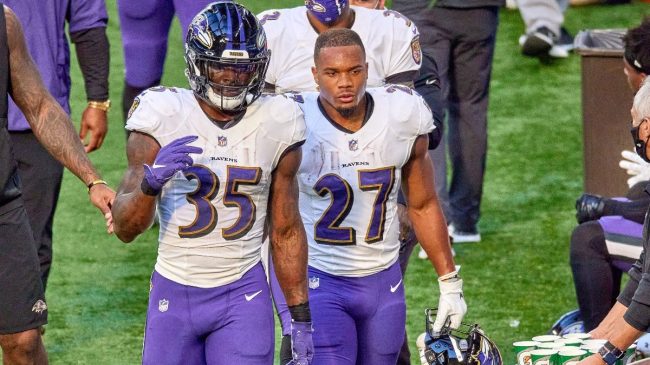 It should be an interesting season for the Baltimore Ravens. Lamar Jackson is back to full health but will be missing Marquise Brown this year. Hopefully, Mark Andrews and Rashod Bateman can keep the passing game alive. However, all eyes are on the backfield with JK Dobbins and Gus Edwards still recovering from injuries last year. Now, the front office makes a move to help bolster the offense.

According to Ian Rapoport, the Ravens are meeting with veteran running back Kenyan Drake. He claims the franchise is expected to sign Drake on Tuesday, giving the team a much-needed boost in the backfield. After the Las Vegas Raiders surprisingly cut him, it sounds like Baltimore is willing to give Drake a second chance.

From NFL Now: On a day highlighted by subtraction, the #Ravens are set to make a big addition at RB. pic.twitter.com/rQkHZeRnFS

This all makes too much sense considering JK Dobbins’ Week 1 status is up in the air. Additionally, Gus Edwards is set to miss the first four weeks of the season. Mike Davis is also on the roster, but based on his performances last year, the Ravens are wise to bring in Kenyan Drake.

We’ll see how he mixes into the offense. Baltimore is elite at running the ball, which bodes well for Drake’s chances. If he can stay healthy, there’s a real chance Kenyan Drake bounces back in a major way for the Ravens.

Look for Baltimore to maintain its top rushing attack no matter who is in the backfield. If anything, Drake can serve as a strong fill-in until Dobbins and/or Edwards are back to full health. Having Lamar Jackson doesn’t hurt either.