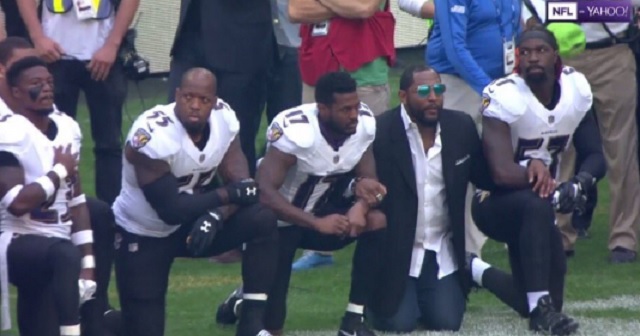 It seems like it was just yesterday that Ray Lewis went on Twitter to tell Colin Kaepernick to stay quiet about his social activism because the football field is their “sanctuary”.

If they really wanna help you, they’ll pray for you, brother,” Lewis says at one point. “They’ll lead you the right way and stop encouraging you to be caught up in some of this nonsense. The battles you are fighting, brother, people way before has been fighting these for many, many, many years.”

brotherhood – we are in this together pic.twitter.com/Q3HpPA0uqr

It seems like Lewis may be changing his tune after he choose to kneel before today’s Ravens-Jaguars game in London a few days after President Trump called for the firing of NFL players who choose to kneel during the anthem.

Ray Lewis, who has been clumsy at best in his comments about Colin Kaepernick, was kneeling during the anthem.