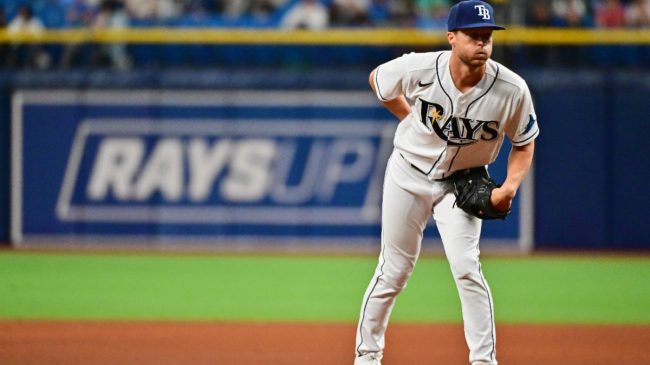 The Tampa Bay Rays had a rough night on Monday, losing 13-2 in a blowout loss to the A’s.

With the game getting out of hand relatively early, Tampa turned to an unlikely pitcher for the final two frames. Outfielder Brett Phillips was called upon to pitch the eighth and ninth innings in an attempt to save the Rays’ bullpen.

Now pitching for the Rays:

His performance was one of extreme highs and lows.

After entering in the eighth, Phillips came on to face the 9-1-2 hitters. He promptly retired Cristian Pache with a flyball that landed just feet from leaving the ballpark. After Tony Kemp reached on a single, Phillips got two-hole hitter Elvis Andrus to ground into a double play for a three-up, three-down inning.

Making that near-perfect frame even funnier is the fact that Phillips did this on just five pitches while throwing a mere 45 MPH.

Things got even more exciting in the ninth.

After walking the first batter, Phillips was able to get a flyout from cleanup hitter Sean Murphy. Then, the pitcher/outfielder made maybe the most impressive play you’ll ever see from the mound.

Oakland slugger Seth Brown popped a foul ball up just in front of the third base dugout. Covering a ton of ground, Phillips chased down the pop fly and made a ridiculous sliding catch to record the second out of the inning.

After the incredible snag, Phillips was just an out away from tossing a pair of scoreless frames, with an opportunity to keep that ERA at a perfect 0.00 in his pitching debut.

Oakland loaded the bases for third baseman Sheldon Neuse, who promptly cleared the bags with a towering grand slam.

A story in three parts…

What a roller coaster.

Hopefully the Rays aren’t forced to call on Phillips too much more in the future.