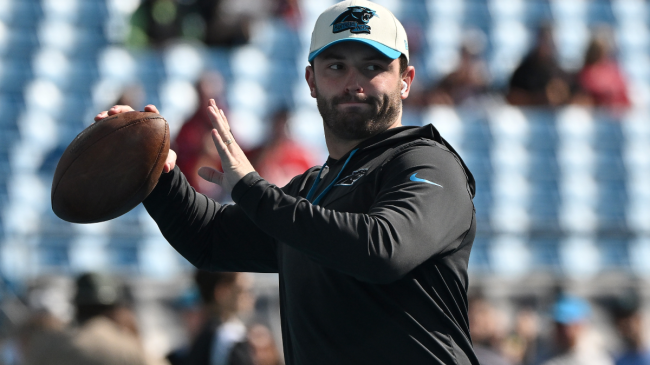 The Baker Mayfield era in Carolina might be coming to an end. The quarterback has been on the sidelines dealing with an injury the last few weeks, and it doesn’t sound like the starting job will be waiting for him when he’s healthy.

Part of that is due to his play on the field. Through five games of action, the passer is 1-4 under center. He’s completed less than 55% of his attempts while throwing for 192 yards per game. Mayfield has thrown as many picks as he has touchdowns, and he looks far from the player the Panthers envisioned when trading for him this offseason.

The other reason is due to backup quarterback PJ Walker’s recent performance. In a little over two games of work, Walker has thrown for 297 yards while completing over 70% of his passes. Most recently, he helped the Panthers land their second win of the year, a shocking upset of the division favorite Bucs. It’s now created a bit of a QB controversy in Charlotte.

Mayfield’s poor play not only affected his own NFL future, but the Carolina organization as a whole. Following a slow start, head coach Matt Rhule was fired, and star player Christian McCaffrey was traded away.

Interim coach Steve Wilks seems to have more faith in Walker moving forward, and he hinted as much in a recent press conference.

Baker Mayfield is expected to be replaced by PJ Walker against the Falcons.

Wilks told reporters that he’s made his quarterback decision ahead of another divisional matchup with Atlanta. NFL insider Ian Rapoport confirmed this in a tweet on Monday.

Panthers interim coach Steve Wilks tells reporters that QB P.J. Walker will start Sunday even if the others are healthy. He has earned it.

The news may not come as a shock given how poorly the offense performed with Mayfield at the helm, but it’s not something that many saw coming at the start of the season.

Mayfield is a former Heisman winner and No. 1 overall pick. Walker was playing in the XFL as recently as 2020. He also entered the season third on the Carolina depth chart behind both Mayfield and another former first-round pick, Sam Darnold.

That’s not to say he’s not capable. Walker is 3-1 as an NFL starter, beating the Lions, Cardinals, and Bucs. His lone loss came to the defending champion Rams just two weeks ago.

Still, it’s a shot to Baker’s ego as he was hoping to revive his persona with the Panthers. Many on social media are now trolling Mayfield for being replaced.

After seeing the report posted by Rapoport, many took swipes at Mayfield in the comments section.

One person wrote, “Wow, a #1 pick got outplayed by an XFL QB.” Another simply said, “Baker’s career is over.”

Damn bakers career is over

This Panthers fan is excited about the change under center, commenting, “I don’t have to see Baker Midfield.” Brutal.

LFGGGGG I DONT HAVE TO SEE MIDFIELD

We’ll see how it continues to unfold in Carolina as the QB carousel goes round. It looks like Mayfield will be watching from the sidelines for at least another week.