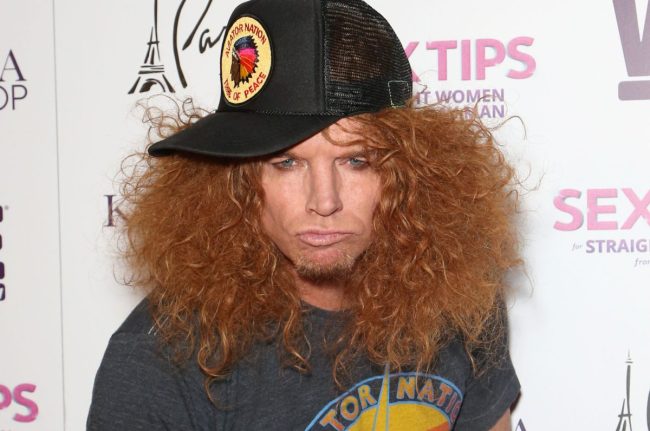 Scott Thompson, AKA “Carrot Top,” was seen placing a Raiders Super Bowl bet at a Las Vegas casino. The actor is apparently backing the Derek Carr-Davante Adams connection with hopes that the team will beat out the Chiefs, Chargers, and Broncos in the AFC West.

Thompson was a main stay on the television circuit in the 1990s and early 200s. He created shows for Cartoon Network, appeared in reality series, and gained a ton of popularity in commercials. Carrot Top can still be found doing standup comedy around Sin City.

And I guess he can be found in the casinos, too.

It’s not known exactly how much the wager is worth, but Las Vegas does hold +4000 odds at most sportsbooks. So, if Carrot Top threw $100 on the Raiders and they pull off the unthinkable, he’d win a quick $4,000.

While that may not seem like a longshot given the offensive talent that’s in Vegas, the Raiders hold by far the worst odds in their division. The Chiefs, Chargers, and Broncos can all be found between +1000 and +1700.

Due to that outlook, not many are fond of Carrot Top’s Raiders pick.

Fans weren’t high on Carrot Top picking the Raiders to win the Super Bowl. Many believe he’s just throwing away money ahead of the NFL season.

The funniest thing carrot top has done in a long time

Guy really is a comedian.. https://t.co/v3unY8vRYT

We’ll see if the actor can cash in on a payday this February. Last season, the Raiders made the playoffs for the first time since 2016, and they hung tough with the AFC champion Bengals before falling in the first round.

Here’s to hoping they get back to the postseason in 2022.