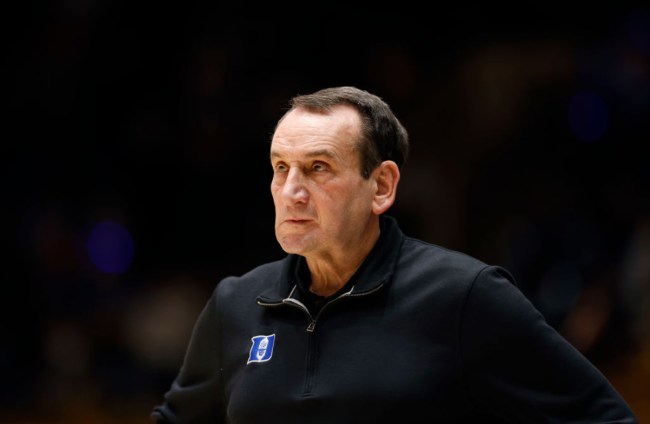 The back-and-forth contest was highly entertaining. The two teams traded leads in the final minute and a half of action, but it was North Carolina that prevailed with an 81-77 victory.

The Final Four loss ends Duke’s season while it sends the Tar Heels to the national championship. Krzyzewski has now had two send offs ruined by his arch-nemesis as UNC also defeated Duke in his final home game.

As expected, the social media reaction was wild.

While most people were talking about the game, itself, many were also taking time to reflect on Coach K’s coaching career. That also meant debating about the future.

Can he really go out like this? A loss to North Carolina in his final game?

Some don’t think so, and they’re waiting for a comeback announcement from the coaching legend. Fittingly, they’re using Tom Brady as a reference for their un-retirement hopes.

Earlier this year, Tom Brady decided to hang up the cleats for good, announcing that he’d be stepping away from the game of football. That lasted all of two months before Brady broke the news of his return from retirement.

Now, fans are wondering if Coach K will do the same.

Might need to give Coach K a call, @TomBrady 😅

How long until Coach K pulls a Tom Brady and unretires after that?

Any way Coach K pulls a Tom Brady and comes back out of retirement after both of these losses to North Carolina?

Coach K retirement might be shorter than Tom Bradys hahaha

Coach K might have to run it back one time Tom Brady style!

How long before Coach K realizes he doesn’t golf and doesn’t like babysitting before he comes out of retirement Tom Brady style? 😎 https://t.co/XuXtYtcstW

Coach K is about about to pull a Tom Brady, watch.

What if Coach K pulls a Tom Brady and is just like “nah, nvm.”

Coach K will stay retired for 6 weeks like Tom Brady and come back to work.

Who else is hoping that Coach K takes a page from Tom Brady and un-retires very soon?

What if we go thru all this fanfare with Coach K, then in a month he says…”nah, I’m coming back.”

That would be wild wouldn’t it @TomBrady 🤷🏻‍♂️

Coach K trying to get ahold of Tom Brady to ask him how to go about coming back for another year for a redemption tour 🤣 pic.twitter.com/A0qxO49M1a

If it happens, no one will be surprised.