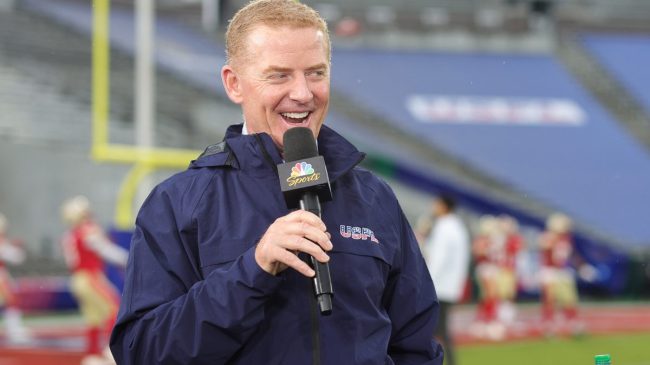 NBC is looking for a replacement for Drew Brees. The former quarterback turned TV analyst was with the station for just one season before the relationship reportedly “soured.”

Last year, Brees was in the booth on both NFL and college football broadcasts. With the future Hall of Famer out, management is zeroing in on its next target.

According to New York Post columnist Andrew Marchand, former Cowboys head coach Jason Garrett is being eyed to take over in the booth at NBC next season. His duties would not only include Football Night in America, but also Notre Dame coverage. For those Fighting Irish contests, he’d team up with Jac Collinsworth, the son of famed sports broadcaster Cris Collinsworth.

It wouldn’t be too difficult of a transition for Garrett, who’s already employed with company calling USFL matchups. And, of course, he has expansive NFL experience as both a head coach and offensive coordinator.

Garrett wasn’t always the most popular person in Dallas although he did lead the Cowboys to three playoff appearances. Over 10 seasons, he finished with 85 wins. He then moved on to call plays for the rival Giants before being fired before his second season was through.

Now, he hopes to use that knowledge in the booth. The NFL world was quick to react to the report on social media.

This is big news in the world of sports, and it was met with mixed reviews.

Some were upset with Garrett getting a look, saying he brings yet another boring personality to the broadcast booth.

I am begging broadcasting booths to have one cool thought https://t.co/eUkiHSmB40

SUNDAY NIGHT FOOTBALL EXECUTIVES AT DINNER: man I could really go for a second helping of dry toast https://t.co/oaVLJYIHMW

Albeit subtle, there IS a difference between French vanilla ice cream and vanilla bean ice cream. https://t.co/Za0TaU0rnX

Others were happy to hear the news, and they hope that Garrett gets the gig.

We’ll see if the two sides agree on a deal.