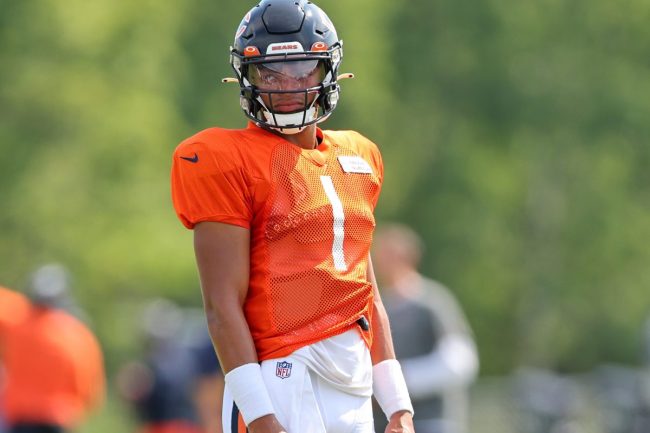 Fans are joking that the Chicago Bears are in midseason form after seeing quarterback Justin Fields airmail an open receiver in training camp. The play saw the signal caller miss badly on what should’ve been an easy touchdown.

These clips are easy to run with, especially considering Fields hit the same exact play a couple of snaps later. But given the passer’s track record in the NFL, he’s an easy target.

Fields was one of the league’s worst passers as a rookie, completing less than 59% of his throws. He tossed just seven touchdowns while recording 10 picks on his way to a 2-8 overall record as a starter.

It wasn’t all his fault.

He wasn’t exactly surrounded by the NFL’s best roster and coaches didn’t always put him in the best position to succeed. But that criticism comes with the territory of being a first-round pick.

After seeing a viral clip of a missed Justin Fields pass, fans responded with hilarious reactions on social media. Take a look.

With that coverage he threw it the only place he could.

Some are saying the Bears will be the worst team in the league with quarterback play like this.

The Bears could actually be worse than the Falcons and the Texans this year.

@brando24245 probably the worst team in the league this year 😍

We’ll see how Fields plays in year two with the Bears. He’ll be expected to make a jump from that tough rookie season and provide Chicago with a steady presence under center.

Hopefully, he’s able to work the kinks out in training camp.