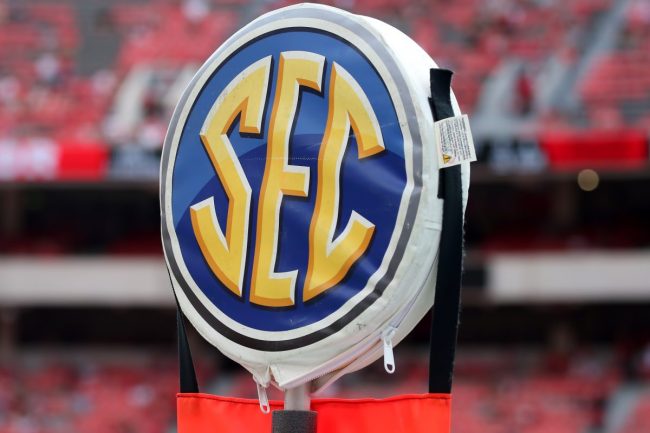 The NCAA is putting another spin on the targeting rule in the 2022 college football season.

It’s a rule that has been changed and adjusted since its introduction to the sport, and one that fans are not always happy to see go against their team. While it’s been put in place to limit serious injury, often it seems subjective to the referees involved.

Targeting can get players ejected from contests, as well as land teams a 15-yard penalty. The introduction of instant replay has helped cut down on wrongfully called targeting penalties, but it’s still not 100% correct.

Now, it seems the NCAA is tinkering with the rule even more, and it could have a major impact on pass rushers.

Targeting is defined as making forcible contact that goes beyond a legal tackle to a defenseless player. Below is the breakdown of different scenarios.

The Southeastern Conference’s Twitter page recently posted an update on the rule to include passers “in the act of throwing” as being defenseless players. This NCAA update adds even more to a rule that’s already controversial.

“A player in the act of or just after throwing a pass. This includes a player in a passing posture with focus downfield.”

It’s safe to say that fans are not happy.

Fans are not happy seeing yet another adjustment to a rule that’s not been perfected. With the “in the act of throwing” update, a sack (if meeting one of the above conditions) could now be seen as targeting.

Just wait until your team gets a huge hit on the quarterback forcing a fourth and long, only to see a drive continue due to penalty. Take a look at the immediate reaction.

How the @NCAA recommends legally sacking a QB https://t.co/QewfcoNNar pic.twitter.com/ew8Nf4qhHr

Sacks are now penalties? Or am I reading that wrong @SEC https://t.co/3O9aD2GsLr

Another says, “The SEC will allow zero sacks this season. That’s impressive.”

Fans want a further explanation. This will surely wind up affecting the outcome of a game in the 2022 season.

I would like an actual explanation from official of what a defensive player is supposed to do when he has a clean path to the quarterback. What can he do to make a tackle that isn’t a penalty, based on this wording? https://t.co/W1QwJxFQ9i

This is going to go VERY poorly https://t.co/fGPPzTGWSF

This tweet sums things up pretty perfectly. “This will cause massive issues.”

This will cause massive issues. https://t.co/N2MNcsMslI

It will only be a matter of time before this update has a negative impact on a game. Hopefully, your team won’t be on the losing end.