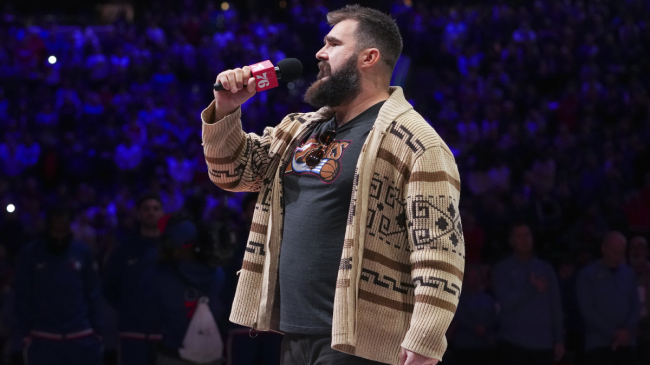 The offensive linemen of the Philadelphia Eagles are releasing an album this December, and it’s one that everyone needs to have playing on repeat this holiday season. Not just football fans.

Jordan Mailata, Jason Kelce, and Lane Johnson have teamed up to produce the record of Christmas hits and on Wednesday, the trio teased the release with a preview. It didn’t disappoint.

A post shared by A Philly Special Christmas (@aphillyspecialchristmas)

The album, titled A Philly Special Christmas, is available for pre-order via iTunes with vinyl copies also being made to be ready by the Christmas holiday. The first single on the album, however, will go out to the public on Black Friday, giving fans plenty of opportunity to get in the holiday spirit. It’s not the first time A Philly Special Christmas has been teased, as Kelce dropped a similar preview back in October to build the anticipation.

What’s most impressive is the fact that these big uglies have some serious pipes. It’s not necessarily a surprise as Mailata has been a contestant on The Masked Singer while Kelce has been heard singing national anthems at Philadelphia sporting events throughout the years. Still, just seeing these guys in action has struck up quite the reaction on social media.

Most were impressed by Mailata after seeing him hit that high note in the opening scene.

Me when Mailata cuts in: pic.twitter.com/MiXsuxiuct

One person wrote, “That’s legit Mailata? This is awesome.” Another commented, “Our left tackle is the songbird of our generation.”

Kelce’s performance didn’t go unnoticed, either. One fan replied, “I can’t get past Kelce singing like stone cold Steve Austin,” after hearing the teaser.

Orders can be placed at the Philly Special Christmas website, with the vinyl records starting at $75. There are a variety of bundles also available at varying prices. Sticking with the spirit of giving, proceeds from the album sales will benefit The Children’s Crisis Treatment Center in Philadelphia.

If the voices of these Eagles aren’t enough to make you purchase, maybe supporting a worthy cause is.