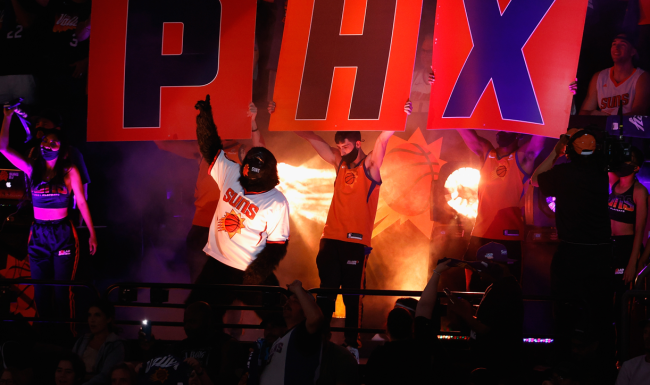 Former NBA player Lamar Odom claimed recently that the Phoenix Suns’ gorilla mascot is racist, but not all basketball fans are buying it. Should they though?

During his appearance last week on the Bootleg Keg Podcast, which is hosted by a Suns fan, Odom claimed that despite the NBA getting rid of Phoenix’s owner Robert Sarver, the gorilla mascot is still generating a racist message at games.

Srrver, who was ousted after multiple claims of racism, sexism, and sexual harassment, has decided to sell the team after initially being suspended for one year and fined $10 million by the NBA.

“I feel bad for the Suns fans because they ain’t even gonna get what y’all probably deserve until, probably until you change the mascot,” Odom said on the podcast.

“What does that mean? You don’t like the gorilla? Do you think there’s some racial connotations with the Suns gorilla?” the show’s host then asked.

“Naw. The thing that’s funny is they kind of slid that one by for all these years. Nobody, like, says anything about that. Okay… gorillas, in the desert, you can’t find any. You could probably find a cactus.

“In basketball, bro, just like, come on,” Odom continued. “But you know what’s so, really crazy about it? Is that they, ummm, they just tried it, because they wanted to get the fans involved, and that’s the reason why they kept it, ’cause the fans loved it.”

“I’m just saying, it’s not good representation because Phoenix is like the last city to recognize Dr. King as a holiday,” Odom added.

“It’s just like, how they change the Redskins and the Indians to the Commanders… yeah, I think it’s probably about that time.

“As a woke young black man in America right now, in this climate, I’m surprised Chris Paul hasn’t said anything about it.”

Knowing the allegations that have been levied at Suns owner Robert Sarver over the years, it’s not much of a stretch to buy into what Lamar Odom is saying.

Unfortunately, that correlation doesn’t hold up to scrutiny.

Gorilla debuted in the 80s, Sarver bought the team in 04

Not everyone could reach as far as Odom does in believing the Suns’ gorilla mascot is racist. In fact, most of the responses to his claim think he is mistaken.

Many Giants in New York?

Or Eagles in Philly?

Bears and their cubs in Chicago?

Almost like teams aren't geo locked for their identity

“Yeah for 20+ years they slid it by…” another NBA fan tweeted.

“Well we do blaze in Portland so they got that right,” joked another fan.

That's pretty much what happened. Lamar Odom doesn't know what he's talking about.