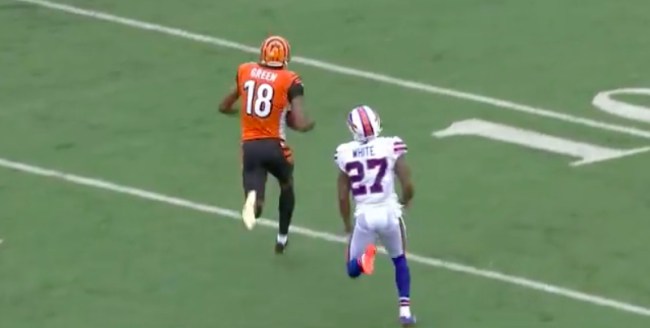 We’re a couple weeks removed from having football in our lives, and I don’t know about you, but I’m getting sick of betting on Olympic luging. While the emotions tied to the 2017 NFL season are beginning to fade, do yourselves a favor and check out your team’s longest play from scrimmage this season. For old times sake.

Buffalo Bills — 48 yard touchdown run by Shady McCoy. The Bills were the only team not to convert a 50+ yard play the entire season.

Minnesota Vikings — Case Keenum tosses a short pass to Adam Thielen and he does the rest. 65-yard touchdown.

Baltimore Ravens — Joe Flacco to Mike Wallace for a 66-yard gain that brought the Ravens up to the one-yard line.

Carolina Panthers — Cam Newton tears through the gut of the defense for a 69-yard run. Nice.

Chicago Bears — Mitch Trubisky airs it out to running back Tarik Cohen for a 70-yard reception.

Houston Texans — DeAndre Hopkins catches a screen past and blows by the entire Seahawks defense.

Seattle Seahawks — Russell Wilson to Tyler Lockett for a 74-yard score against the unforgiving Jaguars defense.

Washington Redskins — Kirk Cousins throws a pass in the flat to Chris Thompson on 3rd and 19 and he weaves through traffic for a 74-yard gain.

New York Jets — Running back Bilal Power takes a toss to the house for a 75-yard score, the longest run in franchise history.

Tennessee Titans — DeMarco Murry takes a handoff 75 yards for a touchdown. Rishard Matthews catches a 75-yard beauty from Marcus Mariotta. Derrick Henry turns on the jets for a 75-yard score.

Cincinnati Bengals — Andy Dalton delivers a package to A.J. Green for a 77-yard touchdown pass against the Bills.

New York Giants — Eli Manning hits Sterling Shepard on a slant and he took care of the rest. 77-yard score.

Kansas City Chiefs — Alex Smith slings one to Tyreek Hill for a 79-yard touchdown pass against the Jets.

Indianapolis Colts — Jacoby Brissett connects with T.Y. Hilton on a crossing route and Hilton burns the Texans defense for an 80-yard score.

Dallas Cowboys — Dak Prescott throws a short pass to running back Rod Smith and he took advantage of the gaping wide hole in the Giants’ defense.

San Francisco 49ers — C.J. Beathard heaves one to Marquis Goodwin for a touchdown against the, yep you guessed it, New York Giants.

Los Angeles Chargers — Melvin Gordon runs for an 87-yard touchdown run against the Patriots defense we saw in the Super Bowl.

Oakland Raiders — Derek Carr sails one to Amari Cooper for an 87-yard touchdown against the Chargers.

Los Angeles Rams — Jared Goff slings one from his own end zone to a streaking Robert Woods for a 94-yard score.

Pittsburgh Steelers — Big Ben throws it over the middle of the Lions defense into the hands of JuJu Smith-Schuster for a 97-yard catch and run, the longest play of the 2017 season.