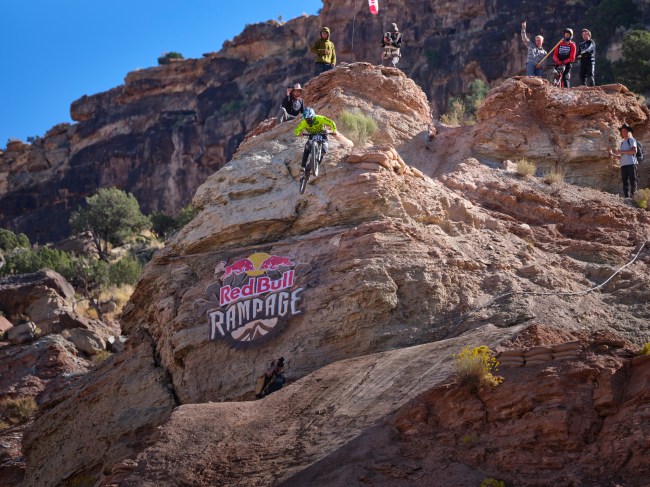 What is up, my dudes? Cass here coming to you live from Virgin, Utah where the 2019 Red Bull Rampage downhill mountain bike competition is taking place.

This is one of the coolest events in all of sports and this year you can stream it live (right now) thanks to Red Bull TV. I took a tour of their on-site production center yesterday and it was wild. They’ve used drones to completely map out the terrain of the mountain and bring you some truly wild augmented reality features on the Red Bull TV app. You’ll be able to see a POV simulation of each rider’s line down the mountain but that’s just scratching the surface.

The 2019 Red Bull Rampage kicks off today (Friday, October 25th) at 9:00am PST / Noon EST on Red Bull TVAlso, be sure to follow @BroBible and @RedBullBike on Instagram if you’re not already for live updates from the course. Here’s that live stream link:

To give you gentlemen some more context on what’s going on this year. This is the second year at this new location which means the riders have some idea of which lines down the mountain are best. The riders get a week to build out their lines down the mountain with the help of two team members. The 3-man teams are allowed shovels and water but no power tools and they’re task is to craft the perfect route down the mountain using the natural terrain and building out jumps.

The riders are judged based on their overall performance which includes the choice of line, tricks, jumps, style, speed, and execution. It’s the combination of all those factors coming together in perfect unison that will crown the 2019 Red Bull Rampage champion.

We hiked up to the top of the mountain yesterday and took a peek over the event’s starting gate and it was straight up wild. I was having trouble comprehending how the riders would even ride down the mountain let alone bust out backflips and tricks along the way.

The jumps. The elevation drops. The speed. It all combines to make this the gnarliest competition in the world and it’s the only true downhill mountain biking event on the annual calendar so it brings out the best this sport has to offer. 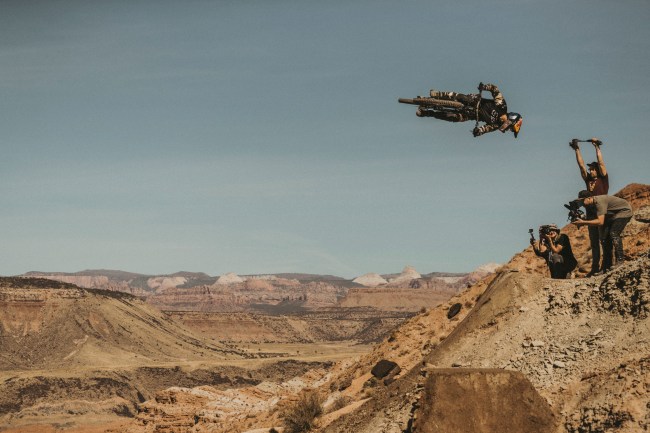 Here’s rider Darren Berrencloth who led our hike up the mountain yesterday giving a preview of this year’s course using a GoPro:

There are 21 riders competing in the 2019 Red Bull Rampage. Each rider gets two runs down the mountain with their best score of the two counting. You’d think that faceplanting into rock would be the biggest concern for these riders but it’s the wind.

Each of the large jump elements throughout the course has been marked with a blue windsock so the riders can see how hard the wind’s ripping. Think about it like this: you’re riding a bike and launch off a 75-foot jump, when you’re soaring through the air your bike becomes the equivalent of the sail on a sailboat. If the wind is blowing too hard it will catch the bikes and flip them sideways and there’s nothing they can do to stop it.

So, each rider has up to 10 minutes between each run to wait on the wind. Once the conditions are perfect they’ll drop in and charge the mountain.

To put on this event today, they’re using 16 live cameras including a cable cam that’s running up and down the mountain as well as a Cineflex camera mounted to a helicopter flying over the mountain. Over 6,000-feet of fiber was laid throughout the mountain to wire it up for this event and its being broadcast worldwide in 7 different languages.

You can also find my tweets at @casspa from the event this year and I’ll be in a helicopter this morning to bring you some sick footage with Red Bull.