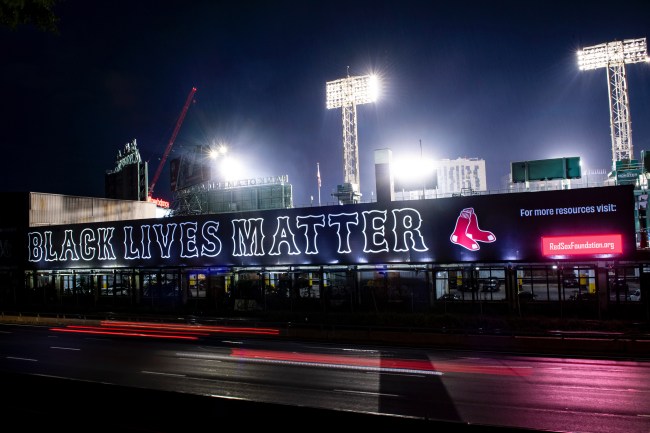 During the MLB’s opening week the Boston Red Sox showed their support for the Black Lives Matter movement in a big way.

On Wednesday, the Red Sox converted the billboard outside Fenway Park into a Black Lives Matter mural overlooking the Massachusetts Turnpike.

The mural; is one of the many ways the organization plans to feature the BLM movement throughout the MLB season.

Recognizing that we have work to do ourselves, we wanted to show that we stand with those who are working to achieve racial equity,” Red Sox spokeswoman Zineb Curran told CNN in a statement. “The billboard is operated by the Red Sox Foundation and one of the ways we plan to feature the Black Lives Matter movement throughout the baseball season as a way to amplify the voices of those who share our values, but may not share our platform.”

The billboard didn’t sit right with many Red Sox fans who took to Twitter to show their dissatisfaction with the organization for supporting Black Lives Matter.

I am disgusted and upset. https://t.co/8r0mNsU3Hl

I never in my life thought I would say this… but I hope the Yankees wallop you every game for the rest of time. Red Sox are cancelled. https://t.co/SE6gPC9Hwa

I’m done.Ive been a fan since 1969. Any organization that supports a Terrorist organization, I cannot support. I want all that believe this to also no longer support the Ted Sox Organization. I wish people would do their homework and see what BLM is really is

They were my favorite team but no longer. BLM stands for Burn/Lute/Murder. They have bowed to the Marxists movement. Hopefully, they will go bankrupt due to lack of fans. @RedSox https://t.co/MAj42rGauC

BOYCOTT BOSTON RED SOX … DISGUSTING PATRONIZING A TERRORIST GROUP THAT THREATENS TO BURN AMERICA DOWN AND TAKE OVER … WHAT IS WRONG WITH YOU PPL @RedSoxFund https://t.co/6R9Pix6fwL

You just lost a lot of fans. The kind that pays the bills https://t.co/BpZWJmHY34 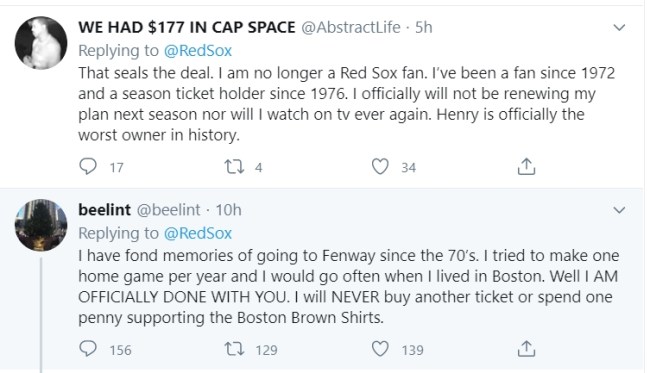 The Red Sox put up a BLM billboard overlooking the Pike that, but they traded away a black MVP for a white domestic abuser cuz white management didn't wanna pay him his worth, and are resisting making payments to black men they sexually assaulted. https://t.co/aYVntGEqnX

You still going to watch MLB folks?  Not me. Adios.https://t.co/aDnPb10DoQ