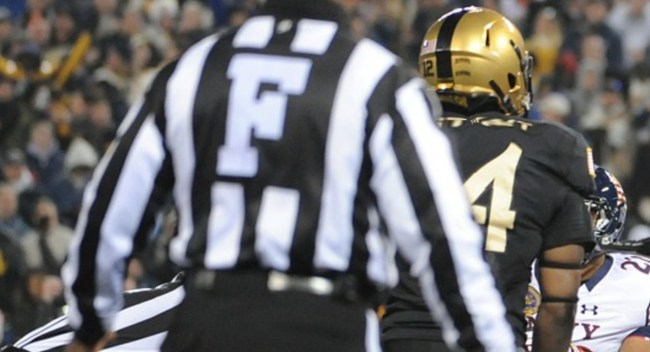 Here’s more proof that there are simply too many bowl games. The Redbox Bowl is getting raked over the coals for the absolute fail that is the t-shirt they are selling featuring the game’s two opponents Cal and Illinois.

The Illinois Fighting Illini will be taking on the California Golden Bears at Levi’s Stadium in Santa Clara (home of the San Francisco 49ers) on December 30th.

What won’t be happening on December 30th at Levi’s Stadium is Cal State playing against the University of Illinois team from several seasons ago.

Not that anyone would know that after seeing the t-shirts the Redbox Bowl is selling promoting the game.

Even worse, the Redbox Bowl doubled down on their mistakes by selling a standalone “Cal State” t-shirt.

Really glad #Cal is going bowling but goodness, the #RedboxBowl has to get the school name right. "Cal State?" Uh, no.🤦‍♂️ #GoBears pic.twitter.com/X8xeJ4XpBk

The Illinois helmet is also wrong. The current orange helmet has a blue I. This is several years old.

Ar least they didn’t spend the money on a solo Illini shirt because none appears on the merch page for the Redbox Bowl reports California Golden Blogs.

Then, as if that wasn’t bad enough, the “tourist destinations” listed on the t-shirt are not even close to Santa Clara.

Here's a handy map of the 7 tourist destinations depicted on the official RedBox Bowl t-shirt, all right next door to Levi's Stadium. pic.twitter.com/CGClM1J3lQ

But wait, it gets worse. The creative director/brand manager for Cal even tweeted about the shirts and the errors that were made, saying that they “officially rejected this design.” Whoops.

UPDATE: we officially rejected this design. It was released without our approval. The University of California, Berkeley Athletics Department either goes by Cal or California, period. Despite this mishap, we look forward to taking on the Redbirds on Alcatraz later this month. 😉 https://t.co/h7bOoffYxr pic.twitter.com/zyTY3uy93Q

Naturally, fans being fans, they had a lot of fun with this situation at the Redbox Bowl’s expense.

It was always Cal State. Some of you just weren't paying attention. pic.twitter.com/jzpmaWqWML

Maybe these will become valuable like when the Post Office makes errors in printing stamps? Buy them all!

Cal State is like the 18th most concerning thing about this design https://t.co/61Kk2VP4hQ

Wait they still have Red Boxes at Cal State?!? 🤣😂🤣

You vs. the guy she tells you not to worry about pic.twitter.com/3zjfKP8PjC