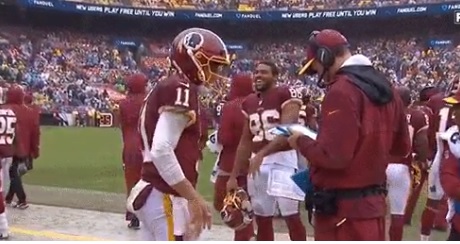 Redskins tight Jordan Reed has been pissing off fans of opposing teams all season with his play.

During today’s Packers-Redskins game, Reed caught 4 passes for 65 yards and had a message for a Packers fan in the crowd as the Redskins took the lead in the fourth quarter.

So, uhhh… I think this is Jordan Reed politely responding to a fan in the stands.

But really your guess is as good as mine. pic.twitter.com/qpSV6WlP76

Jordan Reed says kindly to Packers fan, "sir, would you like a serving of this d!ck?" pic.twitter.com/Ec240wgrFH

Did Jordan Reed just motion for someone to “S*ck my d*ck?” #redskins #nfl pic.twitter.com/EFyevHyOmo

This dude Jordan Reed doing the most💀💀 actin like he aint on live tv pic.twitter.com/sVM0tQ2f8V