Redskins’ Mason Foster Blasts Team, Players And Fans In Leaked DM ‘F*** This Team And This Fan Base’ 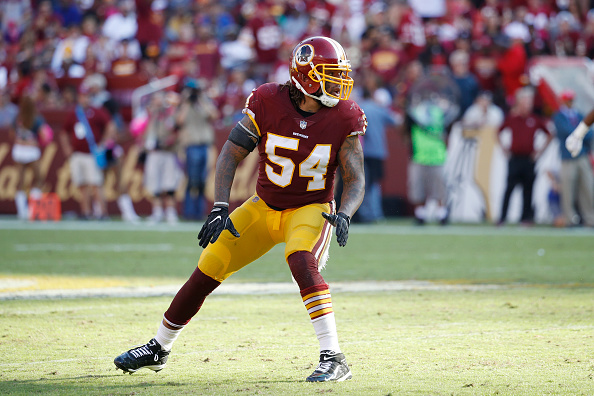 The Washington Redskins might have some locker room drama brewing.

Late last night a fan released a DM exchange with the Redskins linebacker Mason Foster where Foster blasted the team, players and fanbase.

Welp, the MFoster stuff is confirmed. So that's a huge locker room disaster looming. Should be another fun week. pic.twitter.com/OiXotniL5l

Gruden went on to say that he didn’t think the DMs would affect the team and that the fan broke Foster’s trust by releasing a private conversation to the public.

Redskins LB Mason Foster has had enough. Says ‘F*ck this team and this fan base.’ #HTTR pic.twitter.com/9mG3CWmqYt

Jay Gruden on Mason Foster – I really don’t take anything from it. I do disagree with that guy posting a private message

Gruden: I really don’t care. It’s a private message. I know Mason and what he stands for.

Jay Gruden speaks after screenshots of a private conversation between Mason Foster and another individual expressing frustration with the team circulated online. pic.twitter.com/UkQAubAYmZ

There was mixed reaction to Foster’s comments from the local media and fans.

Now that Jay Gruden has confirmed the Mason Foster social media stuff, some quick thoughts. My main takeaway will always be that publishing a private conversation is shameful. Should never happen. Foster used bad judgement to say those things to someone he doesn't know.

This is where I’m at with the Mason Foster story. Foster is often the first person fans look to blame on defense. Hasn’t had the best season, not as bad as many think though. Far from the biggest/only issue. But he can’t say those things to a fan https://t.co/euxWu28Oj4

That’s your captain you have to come down on him harder than this especially it’s been verified. Mason Foster is an idiot to have personal dialogue in that manner with a stranger and think it won’t leak. https://t.co/ooo6d4LHbp

No accountability in this organization for anything Bruce Allen and Jay Gruden have no worries…. Mason Foster says fuck this team & the fans gets a slap on the wrist by Gruden and Jay is fine with it.

#MasonFoster isn’t the first Redskin to quit and won’t be the last. Doesn’t make what he said right but don’t focus on calling out players. Put all blame on Dan/Bruce and the franchise dysfunction. Otherwise, there will just be another Mason Foster two years from now.

I like Mason Foster too, but c’mon Jay. Who care if he said it publicly or privately, how are you going to stand there and defend a guy who said that about the org and fan base? https://t.co/3mHnW2a7jB