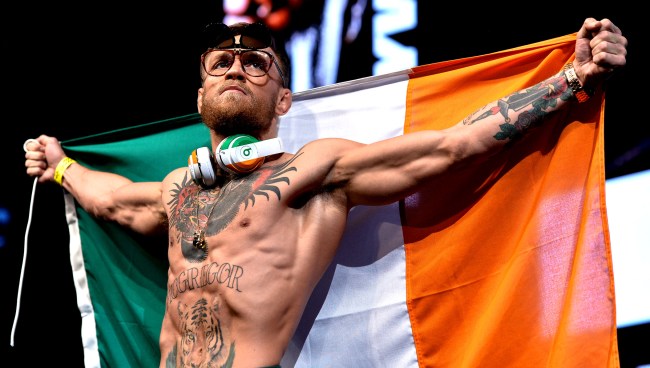 Fight fans are, rightfully, pretty excited about finally getting to see “The Notorious One” Conor McGregor step back inside the octagon at UFC 246 when he faces off against Donald “Cowboy” Cerrone in the welterweight main event in Las Vegas.

It will only be the second time McGregor has fought for the UFC since beating Eddie Alvarez at UFC 205 on November 12, 2016.

And when McGregor makes his walk down to the cage, it would appear that he will be wearing a brand new “Legacy Series” shirt designed by Reebok featuring a cartoon version of himself. At least we think it’s Conor McGregor. That’s what the UFC store says it is.

Imagine wearing this after 1988 pic.twitter.com/ylyI2nlvrk

Not sure why McGregor is wearing a watch or is shirtless while wearing pants. Neither of those things has ever happened inside the octagon.

The shirt, which is currently on sale for the low, low, low price of just $60, was supposedly “designed in collaboration” with McGregor, which seems really, really hard to believe.

The Storylines of UFC 246: It’s All About The Return of Conor McGregor… And The Other Guy

There’s no way he actually wears that shirt on January 18th, is there?

If this was signed off on by Conor McGregor I would be shocked... this is absolutely awful. No grown man should be caught dead in this shirt outside of a video game convention. Let alone a man who loves fashion. The worst shirt ever made by @Reebok not even close. #UFC246 #UFC pic.twitter.com/0tfHBSKVfK

It's the official UFC 246 walkout t-shirt and completely unimaginative. https://t.co/5eAVLOpIl0

Did @TheNotoriousMMA approve this horrifically poor depiction?? I was looking for ward to these shirts but this looks horrible. 😔 #ConorMcGregor #UFC246 https://t.co/jXSbyx86GO

The arms of Hellboy, the face of of a 55-year-old chain smoker. The Apple watch is a nice touch and the belly tiger looks like a prehistoric cave drawing. I predict it will sell out quickly. https://t.co/McPVrOFDPI

1) why does Travis Brown have a new UFC shirt?

What is even going on here

Wait. Conor McGregor is really walking out in this shirt?

Say what you will about him, but he clearly takes fashion pretty seriously. Legitimately can't fathom him walking out with this Bitmoji lookin ass print on his shirt... https://t.co/ttZzW79VkG

So… will you be copping?

McGregor fights always bring out the fanboys. But only the most delusional of the bunch will wear that trash ass Nickelodeon coloring book Reebok shirt

I finally figured it out: McGregor approved this abomination of a shirt, so he can sell more stuff from his own clothing line. 3000 IQ play. 😂 pic.twitter.com/FMdxKjIDx7