The Storylines of UFC 246: It’s All About The Return of Conor McGregor… And The Other Guy 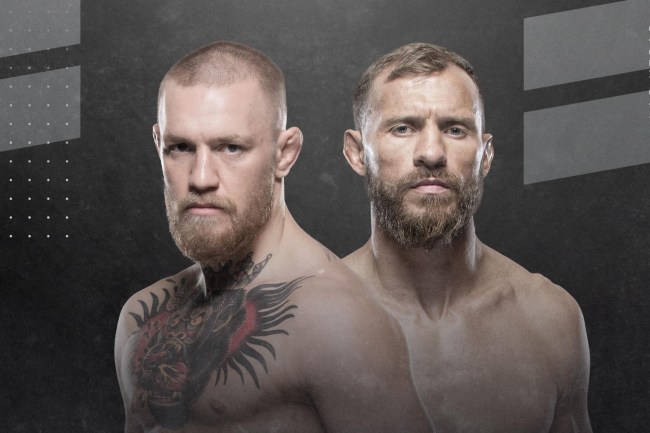 The first big UFC PPV of the new decade, UFC 246, is going down soon. It’s a big time event, with big time headliners Conor McGregor and Donald “Cowboy” Cerrone, and it’s one of those PPV main cards that you’ll need to tune in to ESPN+ for.

I mean, it’s “The Notorious” Conor McGregor, so if you’ve ever even thought about catching a fight on Pay Per View, this is the perfect time.

Now, before Conor McGregor makes his long awaited return to the Octagon on January 18, it’s important to read up on the big storylines leading into UFC 246. Stick with us over at BroBible for the next few weeks and we’ll get you fully up to speed for the UFC 246 PPV main event, and basically the entire fight card.

Can Conor McGregor Return to Form?

This is really the biggest question of all leading into UFC 246.

Imagine, just three years ago, Conor McGregor could do no wrong. He was the UFC’s first champ champ, headlining the first big MMA event at Madison Square Garden. He put on one of the greatest championship performances in UFC history, absolutely obliterating Eddie Alvarez to win the UFC lightweight title.

And this was only months after a pair of legendary fights with Nate Diaz, and less than a year after McGregor shocked the world by winning the UFC featherweight title by knocking Jose Aldo out in just thirteen seconds. Seriously, McGregor was on a run like none other, and then boxing and whiskey got in the way.

In that exact order: boxing and whiskey.

Stepping away from the Octagon to pursue a highly lucrative boxing match against Floyd Mayweather, McGregor has fought in the UFC just once in the last three years, losing his 2018 lightweight title bid against Khabib Nurmagomedov, a bout which was brought to us by McGregor’s own Proper Twelve whiskey brand.

While “The Notorious” has racked up the spirit sales, his MMA win total has remained at 21 since his historic night at MSG, and now everyone wants to see if McGregor can return to form and deliver a dose of knockout juice on January 18.

McGregor has already gone on record to express how good and focused he feels with just weeks remaining until the Cerrone fight. McGregor’s coach, John Kavanagh, has also started his media rounds, reporting that Conor is in top form.

Is it all just lip service? We’ll see on January 18.

What Exactly Does Conor McGregor Have to Win at UFC 246?

So there will be no titles on the line at UFC 246. Neither McGregor, nor Cerrone currently holds a UFC belt, but that doesn’t mean this fight doesn’t have major stakes.

Sure, UFC PPV cards are usually headlined by title fights, even BMF title fights, but McGregor’s name is big enough to command the top spot on the marquee and a five round bout. He’s done it before, breaking PPV records with a pair of fights against Nate Diaz in 2016, neither of which were for a belt. So let’s just forget about titles for the time being.

What Conor McGregor has to win at UFC 246, however, is command of his combat sports future, and a bit of self-respect.

It would be ignorant to forget all of McGregor’s massive accomplishments inside the Octagon just because he lost his most recent bout against Khabib and the boxing match against Mayweather. He’s truly a once-in-a-generation fighter and star, but stars need to win to continue being stars, and McGregor needs to beat “Cowboy” Cerrone if he ever wants to reclaim the glory of his early UFC run from 2013-2016.

With a win over Cerrone, McGregor can call his shot, whether it be a rematch with Khabib or a BMF title fight against Masvidal at the UFC’s annual international fight week in July. There are still a number of big fights for McGregor out there, but many of them only make sense if he can get a win at UFC 246.

For this exact reason, this may be the most pivotal fight of Conor McGregor’s career.

In the interest of educating new UFC and MMA fans, we’re gonna take a step back and assume that at least a few of you aren’t all too familiar with “Cowboy” Cerrone, a fighter who is ubiquitous within combat sports circles, but still possibly unknown outside of the hardcore fight bubble.

But see, Donald “Cowboy” Cerrone is a legendary MMA fighter. No, seriously. He has:

Those are some mighty impressive records and accolades, not to mention that Cerrone is the more experienced of the two when fighting at welterweight, which will be the contractual weight limit at UFC 246. Fighting ten times at 170 pounds, Cerrone has won six times, finishing all six of those wins via KO (4) or submission (2). It’s details like this that have many wondering how Cerrone can actually be a +250 underdog at the sports book when he’s very much a competitive and live dog.

He may not have the wrestling of Khabib or the boxing of Mayweather, but Donald “Cowboy” Cerrone is a fighter who brings a big bag of tricks into the Octagon, and is seasoned and savvy enough to unleash an unexpected technique at any time.

He’s a gamer, and has as many weapons as McGregor.

This primer kicks off our UFC 246 coverage. Stick with BroBible for more fight analysis, more storylines, more trivia nuggets, and all the fight week action.

Dan Shapiro is a writer, editor, musician, and producer currently based in Los Angeles. In addition to covering some of the biggest fights in combat sports history, he’s also hunted down the world’s best sushi, skied the northern hemisphere in July, and chronicled Chinese underground music for publications like CNN, the New York Daily News, VICE, and Time Out. Dan also conjured up a ghost at the Chateau Mormont while out on assignment for RoadTrippers. Follow him on Twitter here.