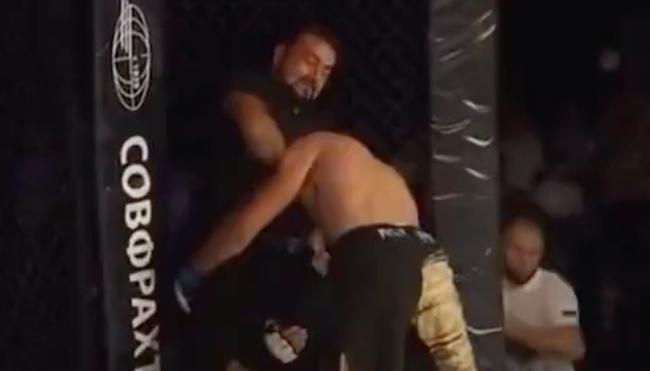 Earlier this year, an MMA referee found himself at the center of a viral video after he was forced to wrap his hands around the neck of a fighter who was apparently unaware his opponent had decided to tap out after getting trapped in one hell of a chokehold.

The fighter found himself at the receiving end of a fair amount of criticism for seemingly ignoring the ref’s demands to let go when it was clear the bout was over, but other people were willing to give him the benefit of the doubt for getting caught up in the heat of the moment.

It is, however, kind of hard to blame the losing fighter who found himself on the receiving end of some similar treatment during an MMA showdown after getting knocked out cold shortly after the opening bell rang at an IFAVIS event in Russia. Based on the video that went viral for reasons that will be obvious as soon as you watch it, the dazed fighter was apparently unaware he’d taken the L but quickly experienced another one when he apparently mistook the ref for his opponent, which resulted in the official treating him to another bout of unconsciousness by choking him out before his team entered the ring to diffuse the situation.

I don’t know how you come back from that.